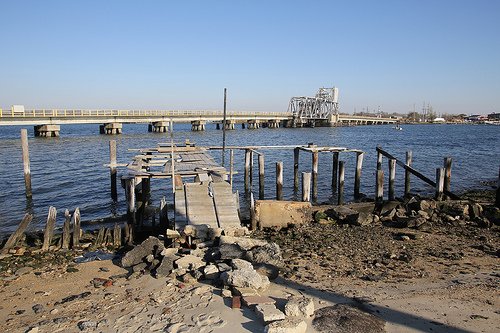 Albany, NY - November 10, 2013 - Governor Andrew M. Cuomo today announced that New York State is committing to fund an approximately $13 million project to provide more than 6,000 feet of flood barriers for the Long Beach industrial district. The industrial district was flooded in the storm surge brought on by Superstorm Sandy, which damaged the city’s key infrastructure facilities and resulted in the loss of essential services to the community.

“Superstorm Sandy caused significant damage to Long Beach just over one year ago, but since then we have made substantial progress in making the area more resilient to the effects of major storms, especially through the hard work of the Long Beach NY Rising Committee,” Governor Cuomo said. “The industrial district provides critically important services to the residents and businesses of Long Beach, and by supporting this project we are ensuring that the city can better protect itself and its infrastructure from the next major storm. These bulkheads and flood barriers are another example of how New York State is helping local communities build back better and stronger.”

Following significant service outages after the industrial district was flooded by Superstorm Sandy, the Long Beach NY Rising Community Reconstruction committee sought to identify innovative ways to protect the city’s infrastructure from the effects of future storms. To that end, this project will add approximately 2,300 feet of bulkheading material to an elevation of 11 feet along the bayside of the district. This provides an extension of current bulkheads located to the east and west of the industrial district.

Additionally, this project will provide roughly 4,400 feet of a permanent subgrade flood barrier, or “Dutch Dam,” that can be deployed to a minimum height of 11 feet in the event of a major storm. The Dutch Dam will be placed along the north side of Park Place to Long Beach Boulevard and West Pine Street to the eastern edge of the wastewater treatment plant, effectively surrounding the eastern and western perimeters of the properties to meet the bulkheads.

Senate Coalition Co-leader Dean Skelos said, "This is a critically important investment to protect infrastructure in Long Beach and give residents greater peace of mind that the utility services they depend on will be protected from future storms. I am pleased to continue to work with the Governor to help Long Island recover and rebuild from Sandy."

Nassau County Executive Ed Mangano said, "I commend Governor Cuomo for this continued efforts in partnering with us to strengthen local infrastructure and protect our residents from future storms. The 6,000 feet of flood barriers for the Long Beach industrial district will help protect essential services and ensure a better, brighter future for our community."

Long Beach City Council President Scott Mandel said, "Once again, Governor Cuomo has shown his sincere dedication to not only rebuilding Long Beach stronger, smarter and safer post Sandy, but to the growth and protection of Long Beach for years to come."

"We are so appreciative of the Governor's support," said Long Beach City Manager Jack Schnirman. "These funds will greatly assist us as we continue to rebuild stronger and smarter.