The hour-long film showcases the settlement of indigenous lands from the perspective of First Nation people. 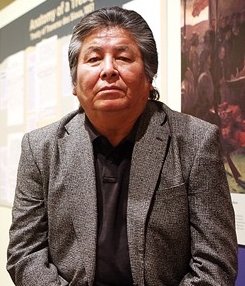 Garden City, NY - November 10, 2015 - In commemoration of Native American Heritage Month, the documentary film Doctrine of Discovery: Unmasking the Domination Code directed by Sheldon Wolfchild (of Sesame Street) will be screened at Adelphi University on Wednesday, November 18, 2015, at 6:30 p.m. The event will be held at the Thomas Dixon Lovely Ballroom in the Ruth S. Harley University Center, 1 South Avenue, Garden City, NY. The free event, co-sponsored by the Collaboration Project and the Center for African, Black and Caribbean Studies, is open to the public.

The hour-long film showcases the settlement of indigenous lands from the perspective of First Nation people by examining the cause and effects of an ancient doctrine that permitted Europeans to conquer lands and peoples around the world. It is traced to Vatican documents issued by popes in the fifteenth century, which purported to grant rights to claim dominion, in perpetuity, over non-Christian lands and their inhabitants.

The documentary is based on the book, Pagans in the Promised Land: Decoding the Doctrine of Christian Discovery, by Steven Newcomb (Shawnee, Lenape), who co-produced the film. Sheldon Wolfchild is an actor and producer who appeared in many films, including Dances With Wolves.

Narrated by renowned singer-songwriter, Buffy Sainte-Marie, the Doctrine of Discovery exposes how the use of ancient papal and royal claims of Christian dominium continue to be used to this day against Original nations and Peoples of the continent, through U.S. Supreme Court precedents. The language of those precedents applies a Bible-premised claim of a right of discovery and domination.

A Q&A session will follow the event featuring the film producers about the continuing impact of the Doctrine of Discovery on Native nations and peoples. The producers will address many questions such as: Why do the United States and other countries continue to claim a right of domination over the Original Native Nations? Why does the United States, on that basis, claim a right of “plenary power” over those Nations?

About Adelphi University
New York’s Adelphi University is a nationally ranked, doctoral research university where students succeed by gaining the skills, knowledge and resources to thrive as professionals and active citizens in an interconnected and fast-paced global society. Today, nearly 8,000 students from 38 states and 46 countries pursue degrees in person and online through Adelphi’s eight distinguished schools and programs—the College of Arts and Sciences, the Gordon F. Derner Institute of Advanced Psychological Studies, the Honors College, the Robert B. Willumstad School of Business, the Ruth S. Ammon School of Education, University College, the College of Nursing and Public Health and the School of Social Work. Chartered in 1896, Adelphi is known for offering a personalized education—one is which students are mentored by talented and committed faculty members and readily find opportunities to initiate, innovate, explore and understand. With dynamic learning hubs on Long Island, in Manhattan and in the Hudson Valley, Adelphi serves communities, both regionally and globally, through the research and practice of its faculty, the collaborative initiatives undertaken by its centers and programs, the staging of distinguished cultural events and, most essentially, the education of future leaders and informed citizens.