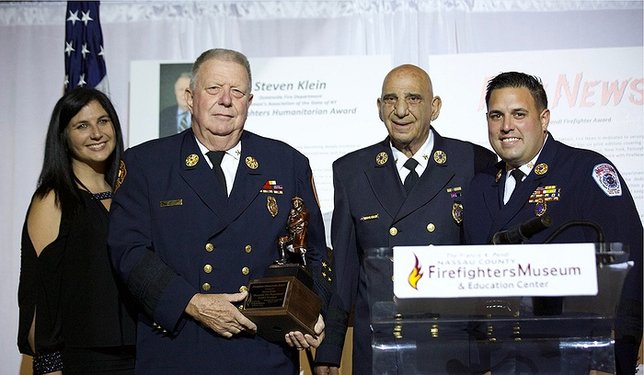 Steven E. Klein, (2nd to the left), President of the Firemen’s Association of the State of New York (FASNY) and member of the Oceanside Fire Department, accepted The Firefighters Humanitarian Award.

Long Island, NY - November 8, 2018 - The Nassau County Firefighters Museum & Education Center held their annual Gala last month on October 5. The Badge of Courage Gala honors those in the community for their heroic efforts and support of fire safety, prevention, and education. This event also helps to support the Museum & Education Center by funding educational programs and demonstrations, updating displays and interactive exhibits, and acquiring new equipment, props and memorabilia.
During the event, the museum bestowed two awards for notable contributions to fire service and one Wall of Fame inductee.
The Firefighters Humanitarian Award was awarded to Steven Klein. A 50-year volunteer firefighter with the Oceanside Fire Department and current President of the Fireman’s Association of the State of New York (FASNY) Klein was presented with this award for his dedication and leadership to the fire service. In the late 1960’s, Klein became involved with FASNY and was inducted as its President this August.
The Francis X. Pendl Firefighter Award was awarded to Fire News. Fire News continues to cover the Long Island fire service in a positive light and reporting all the wonderful things the fire service does. Fire News provides one of the best forms of communications throughout Long Island and they do an excellent job in keeping the history of the fire service alive. With over 45 years of reporting, they are a great resource to firefighters and their communities.
Wall of Fame inductee was dedicated to Thomas Cuff. Cuff was a former honoree at the Gala and firefighter from Levittown. During his sixty-plus years in the fire service, Cuff served many positions within Nassau County and the state, including serving as President of FASNY and a Commissioner with Levittown Fire Department. The Museum is proud to keep his memory alive by permanently recognizing him in on the Wall of Fame.
The Museum was named after lifelong firefighter Francis X. Pendl, an ex-Chief of the Bethpage Fire Department who began to collect fire service memorabilia in the lobby of the Fire Academy to memorialize and educate about the service of Nassau County firefighters.
About Francis X. Pendl Nassau County Firefighters Museum And Education Center
Francis X. Pendl Nassau County Firefighters Museum and Education Center, located at One Davis Avenue by Charles Lindbergh Boulevard (‘Museum Row’), Garden City 11530, is a nearly 10,000 square-foot interactive facility where individuals, families and groups can experience first-hand the proud tradition of local volunteer firefighting. Visitors can trace the history of firefighting in Nassau County with hands-on exhibits that feature antique and contemporary fire apparatus and gear. Kids have fun learning fire safety here! Please visit us at NCFireMuseum.org and Facebook @NCMuseum.