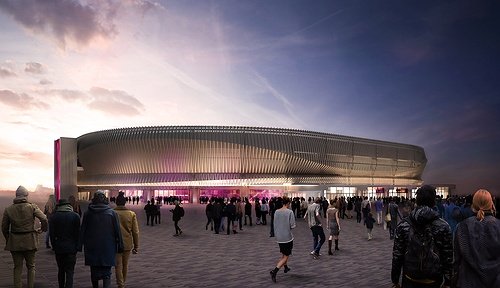 County Executive Mangano stated, “Today we officially begin construction of the new Nassau Veterans Memorial Coliseum and surrounding parking lot into an economic generator that creates new jobs along with a vibrant, attractive destination for Long Islanders and tourists. This is only the beginning as the property will be further developed to create healthcare-related jobs, including Memorial Sloan Kettering Cancer Center and other exciting initiatives.”

“We are thrilled to bring an exceptional guest experience and a dynamic and diverse slate of events to the reimagined Nassau Coliseum,” said Yormark, who will oversee the new venue.  “From sports, to music, to family entertainment, to outdoor festivals and other special events, our soon-to-be-announced programming schedule will complement the local audience and bring the best to Long Island.”

The architect for the Coliseum facade is SHoP Architects, architect for the interior renovation is Gensler, and the construction manager is Hunt Construction Group.  NEC has also secured in principle a naming rights partner for the entire project and will make that announcement soon.

Legislative Presiding Officer Norma Gonsalves stated, “I am so pleased to see this project break ground.  This project will not only bring jobs to Nassau, it will also be the premier entertainment destination for our residents.”

“The groundbreaking for the refurbished Nassau Veterans Memorial Coliseum signals a Renaissance for Nassau’s Hub,” stated Hempstead Town Senior Councilman Anthony Santino.  “Working with a respected development group and Nassau County, Hempstead Town has created a building development zone and approved a master plan for the site that will stimulate our economy, create jobs and establish an enhanced entertainment destination in the heart of America’s largest township.  I’d like to thank Nassau County Executive Ed Mangano, Councilwoman Dorothy Goosby and Supervisor Kate Murray, along with the Nassau Events Center for working collaboratively with the town to bring meaningful and sustainable development to this site.”

The renovation of the 43-year old Nassau Coliseum and construction of its surrounding retail and entertainment center is expected to create more than 1,035 direct construction jobs, and more than 570 additional indirect and induced jobs in Nassau County.  Construction will also generate more than $330 million in economic activity for the County. The Coliseum is scheduled to reopen in winter of 2016.

Both the Coliseum and the retail center are funded by $260 million in private investment from NEC. No tax dollars are being used to construct the Coliseum and its surrounding retail and entertainment center.  Under terms of the agreement, $194.5 million is the minimum guaranteed revenue the County will receive during the 34-year lease term with NEC.  Simply put, the County will receive a minimum of 8% of gross revenue or $4 million annually, whichever is greater; plus $400,000 annually from the retail component or 8% of the gross, whichever is greater.  Payments began pre-construction in August 2015 and will be used to keep County property taxes down. Additionally, $3.7 million in annual sales taxes from the arena will be generated, along with an estimated $2.7 million in annual sales tax from new retail and entertainment surrounding the area.

The Coliseum will continue to be owned by the taxpayers, and Nassau County taxpayers will shed significant costs related to operating the arena. On August 1, 2015, NEC took responsibility for all costs related to operating, insuring, maintaining and providing utilities at the Coliseum. In fact, the agreement provides direct financial relief to taxpayers by eliminating millions of dollars in annual expenses for utilities, parking lot repairs, and capital expenditures.

In the months after construction of the Coliseum begins, work will begin on the plaza surrounding the arena to build a movie theater, family sports and entertainment facilities, and restaurants.