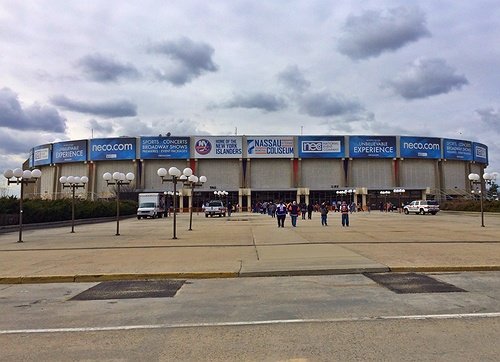 Photo by: TastyPoutine, via Wikimedia Commons.

Nassau Events Center (NEC), led by Bruce Ratner, developer of Barclays Center, and Brett Yormark, Barclays Center and Brooklyn Nets CEO, has a Project Labor Agreement with the Nassau and Suffolk Building Trades Council that is awaiting signature. The agreement is for all of NEC’s construction.

The construction team has fully mobilized on site, the exterior façade signage has been removed, and pre-demolition activities, such as food service equipment disconnects and furniture and fixture removals, has begun.  In addition, following an extensive program of environmental testing, demolition is scheduled to start this fall.

The renovation of the 43-year old Nassau Coliseum and construction of its surrounding retail center is expected to create more than 1,035 direct construction jobs, and more than 570 additional indirect and induced jobs in Nassau County.  Construction will also generate more than $330 million in economic activity for Nassau. During permanent operation, the destination will employ more than 2,700 local residents and provide more than $500 million in projected rent and sales taxes to the County over 30 years.

NEC has also secured in principle a naming rights partner for the entire project and will make that announcement this fall.

“This preparation and on-going activity are important steps forward in our efforts to bring Long Islanders the re-imagined venue they deserve,” said Ratner. “As we continue with our development plans, I am thrilled that the work will be done by the men and women of the local unions. We wouldn't have it any other way.”

Nassau County Executive Edward P. Mangano stated, “Transforming the Nassau County Veterans Memorial Coliseum into a world-class arena is the largest economic development project in the region and I commend NEC and the Nassau and Suffolk Building Trades Council for reaching an agreement that employs local workers.  Nassau County is one step closer to transforming the Hub into an economic generator that creates and retains new jobs along with a vibrant, attractive destination for Long Islanders and those visiting our region.”

“We are excited about getting back to work on the renovation of the Nassau Veterans Memorial Coliseum and creating jobs for our members,” said Richard O’Kane, President of the Building & Construction Trades Council of Nassau & Suffolk Counties. “We look forward with pride to be able to add this most significant project to a long list of marque projects on Long Island.”

“I am thrilled to see so much progress on this project,” said Norma L. Gonsalves, Presiding Officer of the Nassau County Legislature. “Nassau residents have a lot to look forward to once this first class entertainment venue is open for business.”

As part of an effort to bring the best programming to the reimagined Nassau Coliseum, Barclays Center recently opened a Los Angeles office and hired a prominent music executive who will begin to reintroduce the entertainment industry to Long Island.