More than 800 pounds of drugs collected for safe disposal. 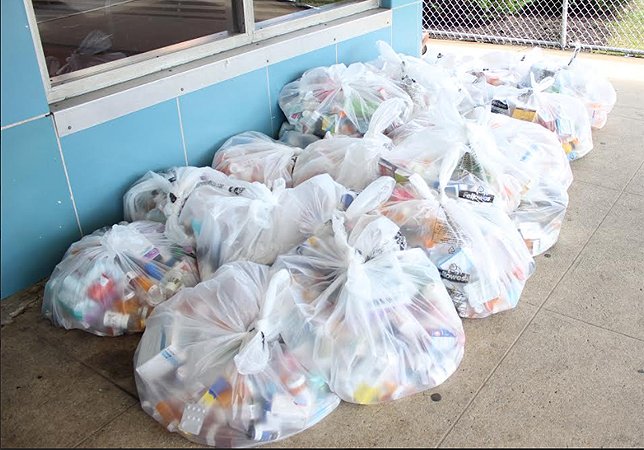 Bags of dropped off drugs on Take Back Day 2017.

Long Island, NY - October 31, 2017 - Senator John Brooks thanks Bellmore-Merrick CHSD, Bellmore Kiwanis, the Community Parent Center and other volunteers and all who participated, assisted, and dropped off drugs at the Fourth Drug Take-Back Day on Saturday, October 28th at Grand Avenue Middle School in Bellmore. The support from the community was overwhelming, with more than 800 pounds (40 large trash bags) of medications dropped off for safe disposal.
The Bellmore-Merrick Drug Take-Back Day was organized to provide the community with a safe, convenient, and responsible way to dispose of unused, unwanted or expired prescriptions and over-the-counter medications. The event was part of a larger, ongoing nationwide effort to collect unneeded prescription drugs, including controlled substances, for safe and legal disposal.
This initiative addressed a vital, nationwide public safety and public health concern.  More than 2,000 teens - between the ages of 12 to 17 - begin abusing prescription drugs each  day (according to a SAMHSA teen survey). At the same time, drug addiction experts contend that abuse of prescribed or legal narcotics, such as painkillers, are a gateway to illegal street drugs such as heroin.   The rates of prescription drug abuse in the U. S. are alarmingly high, as are the number of accidental poisonings and overdoses due to these drugs.  The majority of abused prescription drugs are obtained from family and friends, including from the home medicine cabinets.
By disposing of both prescription and over-the-counter medications, residents took pro-active steps to keep our community safe from drug use and protect our youth, our community and our environment.