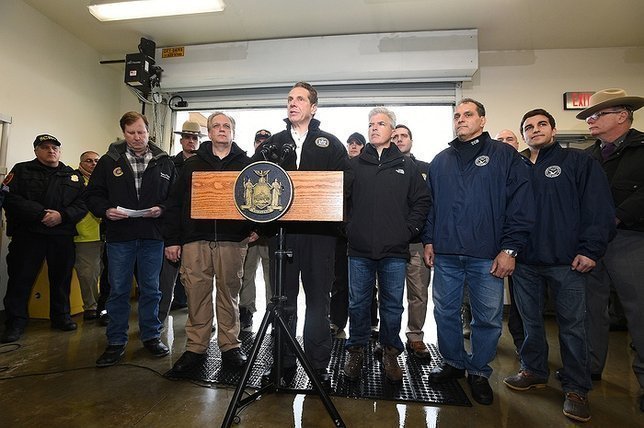 Albany, NY – July 12, 2017 – Governor Andrew M. Cuomo today announced a major disaster declaration has been issued for 28 counties across the state due to the significant snow storm known as "Winter Storm Stella" that occurred from March 14-15, 2017. State and local governments had more than $31.4 million in response costs and infrastructure damage validated as a result of the storm. A major disaster declaration for these counties is the next step in seeking financial assistance from the federal government once the $27.7 million damage threshold is met to allow local communities to continue to recover. Assistance includes funding for emergency protective measures, debris removal, and repairs to public infrastructure.
The 28 counties include Albany, Broome, Chenango, Clinton, Columbia, Cortland, Delaware, Dutchess, Essex, Franklin, Fulton, Greene, Hamilton, Herkimer, Madison, Montgomery, Oneida, Orleans, Otsego, Rensselaer, Saratoga, Schenectady, Schoharie, Suffolk, Sullivan, Tioga, Tompkins, and Ulster counties
"Extreme weather is quickly becoming the new normal and all levels of government need to reorient to best help those impacted by increasingly frequent storms," Governor Cuomo said. "The state is committed to supporting every stage of the recovery process, and this declaration is critical to getting the assistance we need to help these communities move beyond this storm."
"Local and state agencies worked tirelessly to keep residents safe before, during, and after this dangerous storm," said Division of Homeland Security and Emergency Services Commissioner Roger L. Parrino, Sr. "I am pleased the federal government has recognized Governor Cuomo's request for federal assistance as essential to the recovery process. I would like to thank FEMA Region II for their on-the-ground-partnership. This declaration will be a crucial step in helping these communities recover from this storm."
Tragically, three fatalities were attributed to this event. The heavy wet snow and strong winds downed thousands of trees, causing more than 17,000 power outages impacting tens of thousands throughout the State. At the Governor's direction, 1,400 members of the New York National Guard were deployed to assist in response efforts and local emergency responders reported roof collapses, including a community college athletic facility and several dairy barns. A mile long ice jam developed along the Salmon River in the Village of Malone flooding the local water treatment plant and causing residents to be evacuated from their homes.
According to the National Weather Service, record or near record snowfall rates were recorded during the storm. Record amounts of accumulation were measured in Broome County, which saw 36 inches in accumulation, and in Chenango County which saw 35 inches. Delaware County recorded near record snow fall amounts of 30 inches for the duration of the storm. Snow fall rates from this storm were as much as six inches per hour throughout the state.
The Governor declared a State of Emergency on March 14, and local States of Emergency were also declared by 40 local governments due to the severity of the storm. Assistance was given to transport medical personnel and at the height of the event the American Red Cross opened three shelters and five warming centers servicing the local populations.
As a result of the damage caused by these storms, Governor Cuomo requested technical assistance in the form of a Joint Preliminary Damage Assessment, which was conducted between March 30 and May 23, 2017. Results of this PDA validated State and County expenditures of more than $31.4 million in response and recovery efforts.
The federal government makes funding available to state and eligible local governments and certain private nonprofit organizations on a cost-sharing basis for emergency work and the repair or replacement of facilities damaged by severe storms.