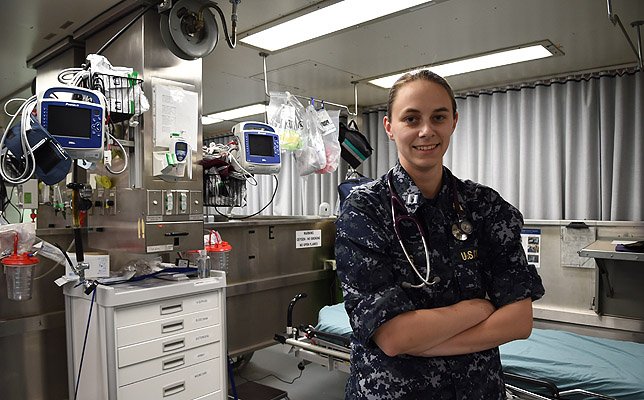 Port Jefferson Station, NY - October 19, 2017 - Five emergency medicine (EM) physician residents from Naval Medical Center Portsmouth (NMCP) embarked on the Military Sealift Command hospital ship USNS Comfort (T-AH 20) in support of relief efforts for those affected by Hurricane Maria in Puerto Rico, as part of their residency training.
Lt. Cmdr. Christopher Perry, Lt. Katherine Biggs, Lt. Jason Hardwick, Lt. Andrew Loomis and Lt. Sean Murnan, EM residents from NMCP, work in the casualty receiving area (CASREC) aboard Comfort.
Comfort was to receive four staff emergency physicians from Navy Medicine East when the ship was activated. Cmdr. John Devlin, the residency program director at NMCP, and the medical director of casualty receiving aboard Comfort, presented the idea to take two staff physicians and five residents, giving more physician manpower and allowing residents hands-on learning by executing the mission.
The five are senior residents, who’ve been through four years of medical school, an internship, are in their third residency year and are only nine months away from graduating.
“I say it’s win-win,” said Devlin. “The people of Puerto Rico are getting more emergency medicine physician manpower than they would have had, had we gone with the original plan.  And from the resident standpoint and the Navy’s standpoint, we are getting five junior physicians that, for their entire career, will have this experience base to carry forward to apply to missions in the future.”
Physicians in residency typically do not deploy.
“Here, we are coming out and doing medicine in a world that’s not at our own institution in response to a natural disaster, and that opportunity just does not happen,” said Lt. Cmdr. Christopher Perry, an EM resident from NMCP.
Residents from NMCP embarked on Comfort in the past for Continuing Promise 2015.  They came to provide primary care and humanitarian relief ashore.
“While [Continuing Promise] is a really great mission to be a part of,” said Lt. Sean Murnan, an EM resident from NMCP, “as emergency medicine residents-in-training, the ideal setting is to work in a place that allows us to respond to situations that receive different emergency patients, and to run an actual emergency room.”
Physicians in residency programs, in both the military and civilian sector, already have the infrastructure of an emergency room in place for them in the hospital. They rarely get a chance to oversee what goes into setting up an emergency room until they’re on the operational side, after graduating.
The five residents on Comfort configured CASREC by combining existing standard operating procedures–those for humanitarian assistance and combat-trauma mass casualty response. The mass casualty operating procedure is geared for support of combat operations during time of war, and humanitarian procedure is geared to support missions similar to Continuing Promise.
“All of us had an individual role,” said Murnan. “All we had to do was kind of mesh those two together and create a plan that could receive a blend of the sickest patients around the island, which is what we’re tending to receive. “
With the help of the “Sea Knights” of Helicopter Sea Combat Squadron (HSC) 22, another opportunity that’s offered aboard Comfort is the chance for EM residents to personally medevac intensive care patients, with two physicians per patient treating them in the air.
“We offer a level of critical care in the air that the military system doesn’t normally provide,” said Perry. “Typically, for military air ambulances, it’s 20-year-old marines or soldiers who have traumatic injuries. Flying chronically ill, very sick patients in theirs 80’s and 90s is not something you ever do in a Navy helicopter. So it’s a little unique here.”
Perry is one of only two aeromedical dual-designated physician aviators in the Navy, having designations both as a doctor and a pilot. Aboard Comfort, he’s in the tower helping coordinate the en route care medevac system.
“It’s like the perfect scenario for us,” said Murnan. “We’re actually able to take on these tasks individually, and come together and build this department, and then see how well it does. And so far, everything’s been pretty smooth.”
Comfort is currently underway operating in the vicinity of Arecibo, Puerto Rico, to provide medical services with additional visits being planned around the island. The U.S. Health and Human Services and Puerto Rico Department of Health representatives are prioritizing patients at each stop prior to Comfort’s arrival. The Department of Defense is supporting the Federal Emergency Management Agency, the lead federal agency, in helping those affected by Hurricane Maria to minimize suffering and is one component of the overall whole-of-government response effort.