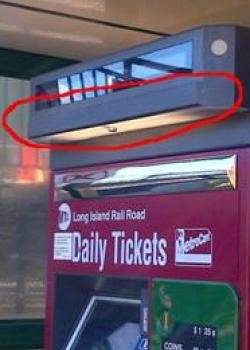 Nassau County, NY - October 19th, 2013 - The MTA Police Department is investigating a potential credit and debit card scam that has targeted Long Island Rail Road ticket vending machines (TVMs) at four locations in Nassau and Queens.
MTA Police Chief Michael Coan urged any LIRR customer who has purchased a rail ticket from an LIRR TVM at any LIRR station using a debit card or credit card to immediately check with their bank or credit card company to determine if their accounts have any unauthorized activity.
So far the investigation has found tiny, hidden cameras attached to a total of seven machines at four LIRR stations: Bayside and Great Neck on the Port Washington Branch, Merillon Avenue on the Huntington/Port Jefferson Branch, and Greenvale on the Oyster Bay Branch. MTA PD detectives and LIRR personnel are checking TVMs at all LIRR stations.
Coan said that in each case the tiny camera was found on the underside of a black metal strip that was placed across the top of the ticket machine with an adhesive. (See the attached photos). He said that strip blended perfectly and looked like it was part of the machine.
Anyone who may have witnessed an individual or individuals acting suspicious or tampering with TVMs, please contact the MTA Police Department at 718-361-2247.