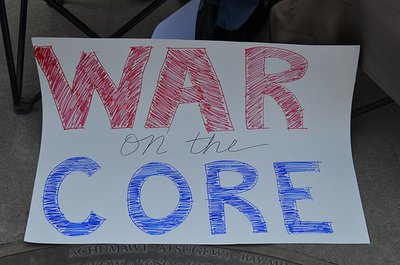 The session at Poughkeepsie’s Spackenkill High School, was filled with irate parents and teachers voicing strong opposition to the state’s hurried adoption of Common Core standards and its strong emphasis on testing and related teacher/principal evaluations.

One of the meetings canceled by King was to be held Tuesday at Garden City High School where parents and educators from across the county would have had the opportunity to express their concerns.

Blaming “special interests” for disrupting the first scheduled meeting, King said, “I was looking forward to engaging in a dialogue with parents across the state. I was eagerly anticipating answering questions from parents about the Common Core and other reforms we’re moving ahead with in New York State.”

“Unfortunately, the forums sponsored by the New York State PTA have been co-opted by special interests whose stated goal is to ‘dominate’ the questions and manipulate the forum,” King said according to The Buffalo News.

But hundreds of Long Island parents say they have been denied the right to express their views.

Garden City Mom Maureen Strysko said she is more than disappointed. "Disgusted is more like it. If you watch the video of the parent comments at the upstate meeting, it is apparent that Commissioner King is not interested in parental input," she told Patch.

"He spoke for over an hour and a half but did not give the parents the same courtesy they extended to him. When it was his turn to listen, he couldn't help but defend some of his points that were made earlier ... Even though the parents already heard it all and they were supposed to be able to comment, he would not just listen and then ended the session after 23 minutes - far short of the hour they were promised."

And now, citing King’s poor performance during his tenure as Commissioner of Education, the Coalition for Justice in Education has started a petition urging the NYS Board of Regents to terminate his employment.

The Coalition points to King’s refusal to “lend credibility to staff and community-voiced concerns that much of Common Core curriculum and testing is developmentally inappropriate for students and that NYS teachers received no significant training for the implementation of Common Core.”

Among many other strong concerns, the group also cites Kings refusal to allow meaningful dialogue about Common Core among teachers and administrators and students, his support of allowing private corporate vendors to have access to personal student information in order to market educational services and his indifference to many of the stress-related issues students face as a result of the strong focus on high-stakes standardized testing.

The petition affirms the belief that, “…New York State’s education reform agenda is fundamentally flawed and must be re-directed in a humanistic, research-based manner; directly counter to the direction Commissioner King has taken…”

Add your comments below or on our Long Island Discussion Forum.

Below is a video of parents, teachers, and concerned citizens addressing Commissioner King with their concerns at the above-mentioned town hall meeting in Poughkeepsie, NY earlier this month. Video courtesy of Mert Melfa's YouTube Page.