Governor Andrew M. Cuomo today announced a number of new measures to support the mission of the Task Force to Combat Worker Exploitation. 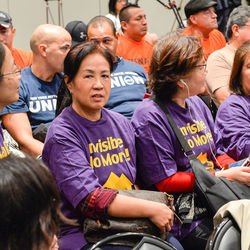 Albany, NY - October 14, 2015 - Governor Andrew M. Cuomo today announced a number of new measures to support the mission of the Task Force to Combat Worker Exploitation. First, the Task Force will be supported by $700,000 to coordinate outreach and education with workers and employers, as well as investigations, prosecutions and data collection and compliance efforts. Additionally, the Governor has created an Anti-Retaliation Unit and a Mediation Unit within the State Department of Labor to eliminate retaliation against workers who assert their rights, and to expedite the speedy disposition of cases generated by the Task Force’s investigations. The Governor has also launched a new website to provide workers, employers and the general public with information about the Task Force and how to come forward and help combat worker exploitation.

“Our administration is taking aggressive steps to protect workers and combat exploitation, and today we continue our progress in that fight,” said Governor Cuomo. “I want all employers across the state to hear this message loud and clear: we will not tolerate worker exploitation, period."

These announcements coincide with the first public meeting of the Task Force’s advisory committee, which was held today in New York City. So far, the Task Force has opened 30 joint-agency enforcement cases across the state. The 30 employers at the center of these investigations are accused of violating child labor laws, stealing wages, tips and overtime pay, retaliating against employees who complain of wage and workplace violations, failing to carry appropriate Workers Compensation Insurance or contribute to the Unemployment Insurance Fund. The industries include restaurants and delis, supermarkets and housecleaning companies, landscaping and car washes. The investigations will be joined by every Task Force agency with jurisdiction over these industries.

As part of today’s advisory committee meeting, video testimonials were also presented that included the experiences of workers who were exploited in various industries across the state. Those industries are now the subject of Task Force investigations. The testimonials can be viewed here.

The Anti-Retaliation Unit announced by the governor today will work with all Task Force agencies to combat the exploitation and misclassification of workers by immediately engaging an employer who faces an allegation of retaliation. The unit of attorneys and investigators will inform affected employers of the severe legal and financial consequences of engaging in retaliation against a worker in order to immediately reverse the retaliatory action and obtain real-time solutions. Worker advocacy groups and employer advocates will have access to the unit by contacting the Task Force Hotline at 1-888-469-7365.

The Mediation Unit will expand on the Department of Labor’s Compliance Conference system to provide opportunities for employees and employers to reach speedy resolution of workplace violations during the pendency of an investigation, but before the issuance of an Order to Comply. The two new units will serve to give workers the confidence to step forward with complaints of wage theft and other violations and expedite resolution of investigations while also helping employers save thousands in potential fines.

The Task Force is the first of-its-kind statewide enforcement effort targeting multiple industries statewide where workers are often victims of wage theft and subject to unsafe work conditions, but do not come forward for fear of retaliation. These industries include:

Workers in these industries are frequent victims of wage theft and are often subjected to unsafe or unsanitary working conditions, unstable or unscheduled hours, and illegal deductions for supplies, training or uniforms. Some may have been trafficked. Abuse of workers often occurs in the so-called “underground economy,” where employees are paid off the books, or not at all, are not protected by unemployment insurance or workers compensation, face threats of harm and are afraid of seeking help from government agencies in fear of losing their jobs or facing other retaliatory actions at the hands of employers. For the most part, these workers are immigrants.

The Governor’s Exploited Workers Task Force is composed of more than 10 State agencies, including the Departments of State, Labor, Agriculture and Markets and Tax and Finance, as well as the Office of Children and Family Services, Division of Criminal Justice Services, State Police and Office of Faith Based Services. Task force agencies engage in regular data sharing procedures to identify employers with the most severe violations. Among the investigators are multilingual agents who speak Bengali, Mandarin, Russian, Spanish, Hindi, Haitian Creole and Korean. Investigators will have access in the field to live translation services in additional languages.

The Task Force’s Advisory Committee, consisting of labor, business and civil rights leaders, will provide Governor Cuomo with legislative, regulatory and administrative recommendations. The committee held its first meeting in August and will provide its first set of recommendations by December, for consideration during the 2016 legislative session.

The advisory committee members are: