The Patton Veterans Project initiative I Was There Films will hold a free, therapeutic filmmaking workshop for active duty and retired service men and women dealing with Post-Traumatic Stress (PTS) on October 26-19 at the ... 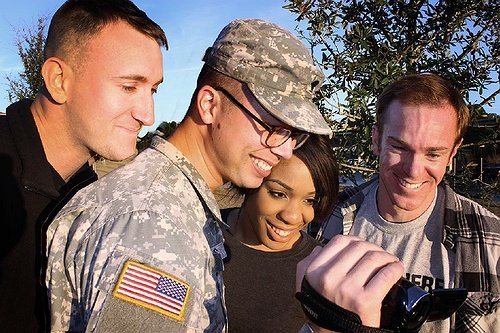 Westhampton Beach, NY - October 13, 2015 - The Patton Veterans Project initiative I Was There Films will hold a free, therapeutic filmmaking workshop for active duty and retired service men and women dealing with Post-Traumatic Stress (PTS) on October 26-19 at the Seafield Center.

“When you have post-traumatic stress, you need to unpack and repack a lot of these overwhelming memories. That’s a lot like film editing,” said Patton Veterans Project Founder and Executive Director Ben Patton. Patton is the son of decorated Major General George S. Patton and grandson of famed WWII General George Patton. He considered a career in the military, but pursued filmmaking and a psychology degree instead. I Was There brings together all three passions, giving back to veterans through a groundbreaking form of film therapy.

I Was There engages active duty and retired service members through filmmaking, using the collaborative and narrative nature of the medium to help veterans heal. During the four-day-long program, participants are introduced to theoretical and practical aspects of filmmaking. They then collaborate with other veterans to conceive, shoot and edit short films, which help them creatively express and gain control over aspects of their military service experience.

“We live by three principles – listen, collaborate and empower. The first two are the key ingredients, and the third is the result,” says I Was There Workshop Director Jeanette Sears. “Every veteran’s story matters and deserves to be heard. Participants can safely engage with others who will listen. In collaboration, they each have had common experiences and now have this filmmaking experience together. They accomplished a mission together with this shared objective.”

I Was There has held over 30 free, therapeutic filmmaking workshops for active duty and retired service members, as well as military families struggling with post- traumatic stress since 2011. Workshops have been held at eight major military installations as well as a workshop in Israel with Israeli Defense Forces soldiers. Workshop participants report a significant drop in PTS symptoms after completing the program.

Watch “Reconnecting,” a short film made at a previous I Was There workshop. More examples of workshop-produced films can be found on the I Was There website. High resolution photos can be downloaded. For more information, contact Workshop Director Jeanette Sears at 646-449-8069.