The Firemen’s Association of the State of New York (FASNY) is clanging the alarm with the message, “Don’t wait – check the date!” 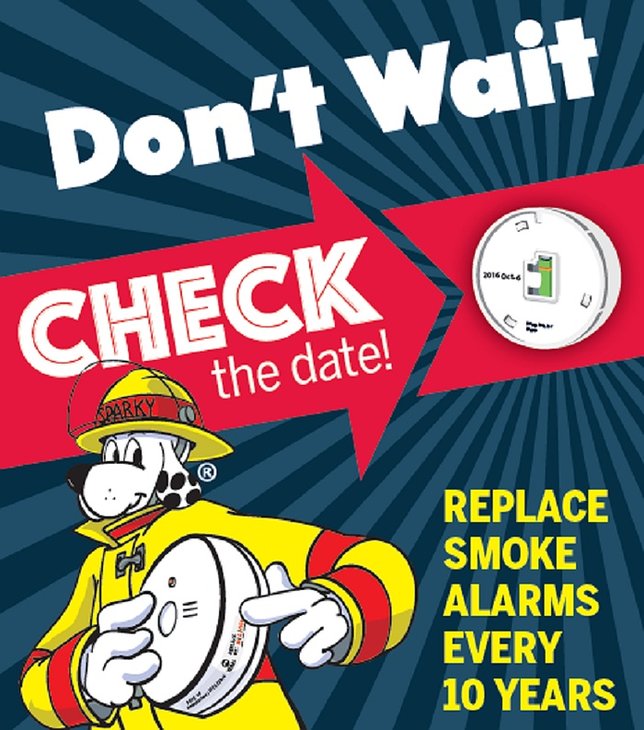 Albany, NY - October 3, 2016 - The Firemen’s Association of the State of New York (FASNY) is clanging the alarm with the message, “Don’t wait – check the date!” - the 2016 theme of the annual Fire Prevention Week, October 9-15  -- promoting the importance of replacing smoke alarms every 10 years.

“Functioning smoke alarms reduce by half the risk of dying in a home fire, so it is extremely important to make sure they’re working properly”, said FASNY President Kenneth Pienkowski.  President Pienkowski noted that families utilizing a 10-year-life smoke alarm in the home can remove a potentially high-danger component of human error from the reliability of alarms.

Statistics show that three out of five U.S. home fire deaths occur in homes with no smoke alarms or no working alarms. Homes with battery-disabled smoke alarms or alarms that have outlasted their full functionality put people at increased risk in the event of a home fire.

Beginning January 1, 2017 in New York State, the sale of smoke-detecting devices powered by removable, replaceable batteries will be prohibited. Instead, retailers will be able to sell only smoke-detecting devices with a power source that isn't removable and lasts at least a decade. Increased availability of extended-life batteries and new tamper-resistant smoke detectors is expected to help individuals and families better protect themselves and their loved ones. Existing devices already in homes will be allowed to remain there until they stop functioning, and smoke detectors with replaceable batteries will continue to be on sale in the state throughout 2016.

New York State law requires that all homes and businesses must have working smoke detectors. Smoke detectors with a 10-year lifespan are already on the market; most are powered by lithium batteries, not a traditional 9-volt.

FASNY, along with the approximately 110,000 volunteer firefighters in New York State and safety advocates nationwide are joining forces during Fire Prevention Week, to remind residents to take the following precautions:

About FASNY
Founded in 1872, the Firemen’s Association of the State of New York (FASNY) represents the interests of the approximately 110,000 volunteer firefighters and emergency medical personnel in New York State.  For more information, visit www.fasny.com.