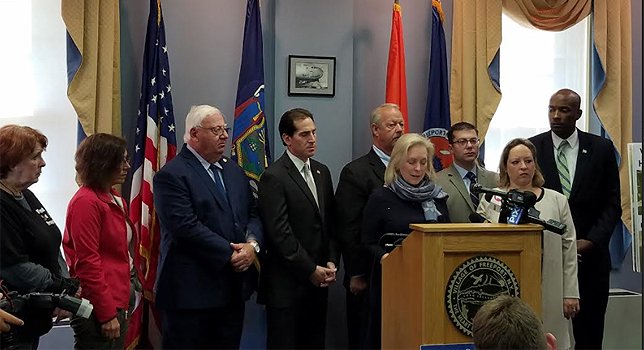 Freeport, NY - October 4, 2017 - Senator John E. Brooks joined with U.S. Senator Kirsten Gillibrand Monday at the Freeport Village Municipal Building in support of her bipartisan legislation to reauthorize the National Flood Insurance Program (NFIP) for ten years. The legislation would create a long-term solution to make flood insurance more affordable for New Yorkers.
The bill would also help make the claims process easier to navigate for homeowners as they try to recover from the devastation of natural disasters. The National Flood Insurance Program failed far too many Long Island families who had faithfully paid their premiums and were depending upon that insurance to rebuild after Super Storm Sandy’s widespread destruction - including a large swath of Long Island’s south shore - nearly five years ago.
“Long Island has hundreds of miles of coastal exposure which can be vulnerable to flooding due to storm surges. While we must continue to mitigate the conditions that contribute to flooding, the availability of affordable flood insurance providing adequate coverage limits for homes is an absolute necessity for Long Islanders in order to ameliorate future losses,” said Senator John E. Brooks. “We appreciate the work being done by these senators to ensure Long Islanders have access to affordable flood insurance.”