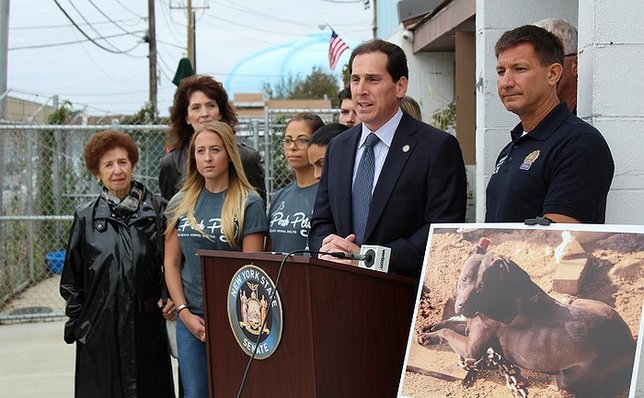 In Nassau County, an individual was recently convicted for the fourth time for his role in illegal dog fighting schemes and is currently serving one to four years in prison, despite his multiple offenses, because the law does not increase penalties for multiple offenders.

Dog fighting is a billion dollar, underground industry within the United States, comprised of promoters, breeders, trainers and sellers.  Money is not only made by wages on the outcomes of fights, but also through the illicit breeding, marketing, trading and sale of dogs.  Professional fighters market the bloodlines of their winners, make money off of forced breeding and sell litters.

“Dog fighting is a heinous and brutal crime and repeat offenders must face increasingly forceful penalties,” said Kaminsky.  “In order to effectively target and diminish dog fighting enterprises, our laws must be stronger.  Professional dog fighters are willing to serve the time because frankly, the financial benefits outweigh the consequences.  Strengthening and redefining these laws will provide enhanced deterrence to animal cruelty and prevent serial offenders from reentering this heinous business.”

“Current laws are simply insufficient as they are not strong enough to deter perpetrators from the possible financial benefits of participation," Kaminsky continued.  “Dog fighting doesn't happen by accident and the sentences for this crime must match the grotesqueness of the act. No one should continuously receive the lowest possible prison sentence for repeated dog fighting convictions.”

In Nassau County, an individual was recently convicted for the fourth time for his role in illegal dog fighting schemes and is currently serving one to four years in prison, despite his multiple offenses, because the law does not increase penalties for multiple offenders.  In his most recent case, he was re-arrested on new animal fighting charges while on parole for only one month following the release of his prior animal fighting conviction.  Senator Kaminsky’s legislation will specifically address the flaw in current law which does not increase penalties for repeat dog fighting offenders.

“My office has prosecuted barbaric and cruel dog fighting rings throughout Nassau County, and we know these bloodsports are frequently linked to gang and drug activity,” said DA Singas.  “Under current law, punishments for animal fighting are woefully inadequate and I applaud Senator Kaminsky for introducing this important legislation to strengthen penalties for those who commit this gruesome crime.”

“Animal cruelty is a serious issue, with animal fighting the most barbaric,” said Gary Rogers, President of Nassau County SPCA.  “This bill will finally give law enforcement and prosecutors the necessary tools to combat this horrendous crime.”