L.I. Who 5 Brings Fans And Doctor Who Celebrities Together

The Fifth Annual Convention Will Celebrate 54 Years of Doctor Who. 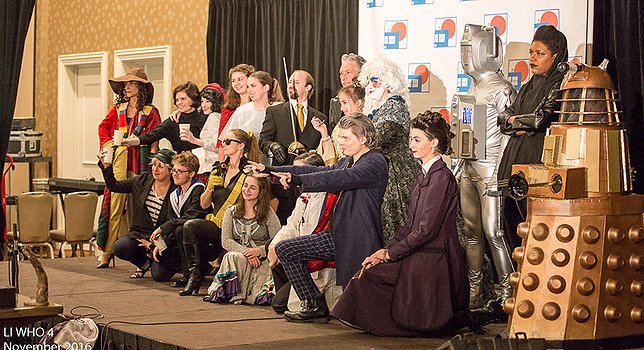 Fans dress up as their favorite Doctor Who characters at last year's L.I. Who 4 convention. This year's upcoming event promises to be bigger and better than ever!

Long Island, NY - September 27, 2017 - Fans from around the world are planning to attend L.I. Who 5, Long Island’s Doctor Who convention, at the Hyatt Regency Long Island on November 10th-12th, 2017. Now in its fifth year, the convention will celebrate 54 years of Doctor Who in television, film, comics, audio dramas, novels and more.
Doctor Who fans will have the opportunity to meet their favorite actors, attend discussion panels, cosplay their favorite characters, and more. A full-size screen accurate TARDIS will be on hand for photo opportunities.
Waris Hussein is the Guest of Honor this year. Hussein directed the first ever Doctor Who serial “An Unearthly Child” as well as the missing classic story “Marco Polo”. His contributions to the early years of Doctor Who were featured in the 2013 movie “An Adventure in Space and Time”. Along with Hussein, the legendary Frazer Hines returns. Hines is famous for portraying the classic companion Jamie McCrimmon during the Second Doctor era. He’s also the inspiration for the main character in Diana Gabaldon’s “Outlander” series.
L.I. Who 5 celebrity guests include Ingrid Oliver (Osgood); the beloved Seventh Doctor, Sylvester McCoy. McCoy also starred in Peter Jackson’s “The Hobbit”. Lalla Ward (Romana II) making a very rare U.S. convention appearance at L.I Who 5; John Leeson, the voice of the Doctor's faithful robot companion K9 will also be attending; and Michael Troughton, actor and son of the Second Doctor Patrick Troughton. Actress Katy Manning (Jo Grant) returns. One of the operators of the Daleks, Barnaby Edwards, will be appearing along with replicas of the Doctor’s arch nemesis.
Over 100 hundred hours of programming will feature bloggers, artists, authors, podcasters, musicians, and filmmakers in discussion panels and performances. Autograph and photo opportunities plus a full-sized vendor hall will be available. Passionate fans will have a chance to volunteer for on-site programming. The Children’s programming department has a full schedule of fun events for the youngest Whovians throughout the weekend.
Passes can be purchased in advance on www.LongIslandDoctorWho.com and will be available at the door.
ABOUT DISCOVER LONG ISLAND
Discover Long Island was established in 1979 as the official tourism promotion agency for the destination’s travel and tourism industry. The organization contributes to the economic development and quality of life on Long Island by promoting the region as a world-class destination for tourism, meetings and conventions, trade shows, sporting events and related activities. For more information, please call 631-951-3900 or visit www.discoverlongisland.com.