Joined by Three DACA Enrollees who Grew Up on Long Island Now Living In Fear of Deportation. 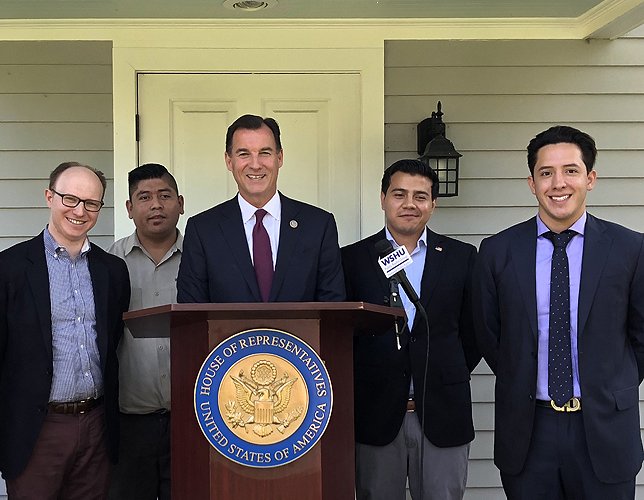 Congressman Suozzi is a cosponsor of the DREAM Act.

Huntington, NY - September 25, 2017 - Today, Congressman Tom Suozzi (D - Long Island, Queens) held a news conference with three DACA-enrolled residents from New York's Third Congressional District. All three are at risk of being deported if Congress does not pass the DREAM Act, which would help up to two million young people stay in the U.S. legally. The press conference can be seen in full here.
One of the affected local residents is Kevin Berrezueta, a student at Baruch College who was born in Ecuador but grew up in Roslyn. Nelson Melgar was born in Honduras, grew up in Glen Cove and has since founded the North Shore Hispanic Civic Association. Carlos Diaz was born in Mexico City, came to the U.S. in 2000 and since 2015 has been working legally for Long Island Carpet Cleaners.
“It’s essential that the American people understand that this affects real people’s lives,” said Rep. Suozzi. He added, “These are hard-working people who contribute to our society in a number of ways, and to kick them out would not only be immoral, it would be un-American. We have to be all-hands-on-deck to resolve this issue and pass the DREAM Act because it involves people’s lives. I encourage more people to get their stories told so we can convince folks on both sides of the aisle that this is the right thing to do.”
Asked what might happen if Congress can’t solve this problem, Nelson Melgar replied, “This may change my status, I may lose my driver’s license, my health insurance, my ability to work, but that doesn’t mean I will lose my ability to dream, my ability to persevere, my ability to continue doing what I’ve been doing up until now.”
“I only have a semester of college left, so after that there is uncertainty over whether I will be able to get a job or not. I’m doing an internship right now, and I don’t know if they’ll be able to hire me. It’s scary, it’s really scary,” said Kevin Berrezueta.
David Swidler is Vice-President of Long Island Carpet Cleaners, and is Carlos Diaz’s employer. “Carlos is just a phenomenal employee, and we would be at a huge loss if he were no longer able to work for us. He comes to work every day on time. He does anything and everything that we ask,” said Swidler.
Congressman Suozzi is a cosponsor of the DREAM Act. He will be signing a discharge petition Monday night on the House floor to try and force a vote on the DREAM Act. As mayor of Glen Cove, he set up the first permanent site on the east coast to help day laborers congregate so they could get work in the town.