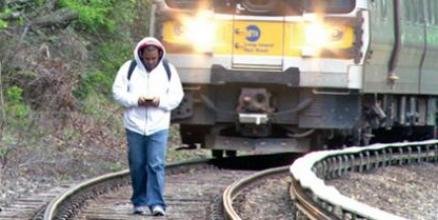 Long Island, NY - October 16, 2014 - MTA Long Island Rail Road is kicking off a new public safety campaign to remind communities in Nassau, Suffolk, Queens and Brooklyn in close proximity to the Railroad that trespassing on LIRR tracks or Right-of-Way is never okay.

Trespassing is illegal, always dangerous and often fatal as the statistics for 2013 show. Thirty-five trespassers struck by LIRR trains last year and 28 died of their injuries, compared with 28 incidents and 18 fatalities in 2012.

The victims ignored posted warnings, fencing or warning lights, bells and crossing gates. They also failed to use common sense and lost or risked their lives and the lives of others seeking a quicker way to get where they wanted to go.

So the Long Island Rail Road is launching a new public safety campaign on television and radio, online and in print, with one message for everyone: “Don’t Shortcut Your Life.” It goes on to say: “Trespassing on train tracks is not only illegal; it’s extremely dangerous; cross tracks only at designated grade crossings” when permitted.

LIRR President Patrick Nowakowski said: “Trains operate at a high rate of speed and take a long distance to come to a stop. No one should ever be on the tracks or Right of Way as trains can come through without warning.”

One powerful message is the 15-second public service video, produced in-house by the Railroad’s Department of Safety & Training that depicts a fictional Right-of Way accident in the making, one that has played also out in real time in the past. In the video, a young man is walking the tracks listening to music on headphones that are blocking out all other sounds, including that of a train approaching from his rear. The actual collision is not shown, but the message is clear: Stay off the tracks.

Nowakowski says the safety of the LIRR employees, customers and the public at large is always the Railroad’s highest priority. With over 700 miles of track from Manhattan to Montauk, the LIRR is largely an open system in which the responsibility for safety is shared by all. For its part, the LIRR is hoping its latest public safety campaign - will get the message across.

In addition to ads on TV, radio, online and print, the Railroad is orchestrating its own communications efforts by going directly to its customers via public address announcements, electronic message boards, posters and the full range of social media, including the LIRR website, customer service email/text alerts, Facebook, Twitter and YouTube.

With safety a 24/7 priority at the Long Island Rail Road, it has for many years conducted a community safety education program called T.R.A.C.K.S. (Together Railroad and Communities Keeping Safe) in partnership with the MTA Police Department. LIRR and MTA PD representatives make presentations promoting railroad safety at schools, civic and business groups, senior citizens organizations, libraries, and other community forums.

The Railroad has also found periodic public service campaigns on safety to be effective reminders. In late 2013, a year in which there were 11 grade crossing incidents resulting in eight fatalities, the LIRR launched an ad campaign that advised the public to “Wait for the Gate: Isn’t Your Life Worth the Wait?” Through August 2014, there have been only two grade crossing incidents, one of them fatal.

To schedule a T.R.A.C.K.S. presentation for your school or community group, call the LIRR at (718) 558-3028. A presenter will arrange a program tailored for your organization, and answer any questions you may have.