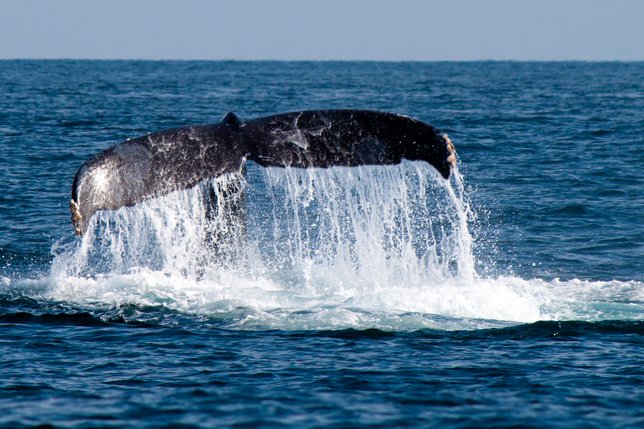 National Oceanic and Atmospheric Administration Fisheries (NOAA-Fisheries) issued an alert to marine boaters due to three recent ship strikes along the eastern seaboard," said DEC Commissioner Joe Martens. "This is a higher number of collisions than expected for this time of year. It's unknown why this is happening but is likely that whales are following their prey into nearshore waters at this time, putting them in the path of vessels and mariners should be aware and proceed with caution while out on these waters."

North Atlantic right, humpback, fin (or finback), blue, sperm, sei and minke whales all use New York's waters as a part of their migratory pathway and may be sighted during at least part of the year. Fin, humpbacks, minkes and right whales are the whales most likely to be seen in New York waters.

All of these species, with the exception of the minke, are designated as endangered species by both state and federal governments. Protection of the critically endangered North Atlantic right whale is of particular concern. The loss of even one right whale may have a significant negative impact on the population. The presence of these and other species of whales in the New York Bight, an area which has some of the heaviest ship traffic in the world, makes potential vessel strikes one of the biggest threats to these animals while in this area.

Since 2008, NOAA-Fisheries placed speed restrictions which reduce the likelihood of vessel collisions with whales. During certain times of year and in certain areas, vessels 65 feet or greater in length must travel at speeds of 10 knots or less when they are within 20 nautical miles of a major port. The NOAA uses voluntary speed reductions to protect whales in areas where three or more right whales are sighted.

Given the recent increase in whales in the nearshore area, the DEC recommends reduced speeds for vessels of all sizes, particularly if a whale is sighted nearby. DEC also requests that mariners report whale sightings. In the Northeast (Virginia to Maine), sightings of whales, including ship strikes, should be reported to NOAA at 866-755-NOAA or to the U.S. Coast Guard on VHF Ch. 16. Whales stranded on New York beaches should be reported to the Riverhead Foundation, New York's designated marine mammal stranding response organization, at their 24 hour hotline 631-369-9840.