Clean Water Advocate to Swim 130 Miles from Montauk to NYC 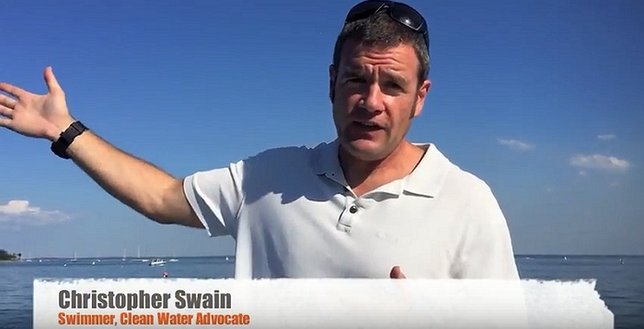 Says Swain, “I believe that every waterway in New York should be safe for swimming every day. The point of this swim is to call for a permanent end to the illegal dumping of raw sewage into our waterways.”

Swain aims to spend 4-6 hours a day in the water during the 18-20 days that he reckons it will take him to complete this swim. He will be escorted by a safety boat throughout his journey, and he will take occasional days off to spend time with his family, and to make presentations to schools and other organizations. Swain estimates he will reach New York City in early November, possibly sooner if he enjoys favorable ocean conditions.

Throughout his swim, Swain will be collecting water quality data, documenting conditions he finds in photographs and video clips, and monitoring his own physiological parameters like hours of sleep, calories consumed and burned, and heart rate.  All of this information will be made available for free to interested teachers in the region. Educators interested in classroom visits are encouraged to contact Swain by email.

Swain’s swim also serves as a fundraiser for his Campaign For Swimmable Waterways in NY.  He plans to post regular updates on his progress here.