Festival founder, Jason Dudek has partnered with LDV Hospitality and Gurney’s Montauk Resort & Seawater Spa to host a two-day comedy extravaganza from May 28 – May 29, 2015 starting at 8 p.m. 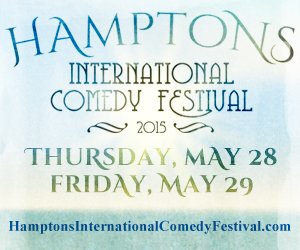 Los Angeles, CA - May 20, 2015 - Festival founder, Jason Dudek has partnered with LDV Hospitality and Gurney’s Montauk Resort & Seawater Spa to host a two-day comedy extravaganza from May 28 – May 29, 2015 starting at 8 p.m.  Veteran comic Butch Bradley will headline the show and serve as co-producer. Natasha Pearl Hansen will join as co-headliner. Jason Dudek of HPR Entertainment has produced comedy shows for the world famous Laugh Factory and looks forward to bringing quality stand up comedy to the newly renovated full-service beach resort.

The festival will unite the duo once again, as Dudek and Bradley have more than a decade-long relationship together in the world of comedy.

Bradley is currently on tour headlining sold out shows in Las Vegas and the East Coast.  He has been featured on HBO, Comedy Central, and Montreal’s Just for Laughs Comedy Festival and is a favorite of the U.S.O. Comedy tour, entertaining the troops overseas for years.  His larger than life act doesn’t just warm a crowd up; it sets them on fire.

Co-Headliner, Natasha Pearl Hansen, began her comedy career with Second City in 2007. She has performed in Festivals & Comedy clubs around the country and her comedic chops have been featured on FOX, Hulu, and VH1. She recently produced and starred in the single-cam pilot "Assistants," which is taking the indie film festival circuit by storm.

The following is a list of featured comedians whose submissions rose to the top and have been handpicked by festival founder, Jason Dudek.

Featured Comedian, Dan LaMorte, is only twenty years old but has experience performing at the New York Comedy Club, Stand Up NY, and Caroline’s on Broadway.  This summer Dan will be performing as part of a U.S.O. event for the Troops at the Langley Air Force base. This past winter he made his stand up comedy television debut on Fox 5 Good Day NY.  Dan is also a staff comedy writer for the popular website, “I left Mars for this?” as well as the personal monologue writer for national keynote speaker, Mark Jeffries.

Featured Comedian, Christoper Sicoli, began his comedy journey last year and hasn’t looked back. After winning the 2015 Bust-A-Gut Comedy Contest and featuring regularly at the Hidden Grounds in New Brunswick, NJ he’s begun to expand his reach and share his views on the absurdities of everyday life.

Featured Comedian, Leo Volf, is a talented stand up comedian, writer, and actor based out of New York City. He was born in Russia, grew up in New Jersey, and currently resides in Brooklyn. Never shy about his love for all three regions, Leo can be heard talking about the finer points of his upbringing on a nightly basis in Greenwich Village. Leo was also recently featured in the UCB sketch program.

Featured Comedian, Shikhar Thakur, was a regular on the comedy scene in Perth, Western Australia and is known for his observational and politically charged humor. He was a national finalist at RAW Comedy, which is part of the Melbourne International Comedy Festival, and the largest nationally televised open mic in Australia. Shikhar has opened for Janeane Garafolo and Godfrey.

About Gurney’s Montauk Resort & Seawater Spa
Situated on Montauk’s most pristine stretch of oceanfront real estate, Gurney’s Montauk Resort & Seawater Spa is a Hampton’s institution and the only four-season resort on Montauk. Providing guests with direct access to a 1,000 ft. private sand beach, Gurney’s features 109 rooms, suites and beachfront cottages, each with dramatic ocean views. Under new ownership led by George Filopoulos and Lloyd Goldman, a multi-phase, multi-year refresh of the entire property began in 2014 and is set to return the year-round spa destination to the epicenter of the Hampton’s experience.

The first phase welcomed 38 brand new oceanfront luxury guest rooms, a revamp of the celebrated Beach Club – the only beach dining in the area – and signature ocean-fed seawater swimming pool, the only of its kind in the United States. This summer the resort will unveil a highly anticipated food and beverage experience, led by LDV Hospitality and newly renovated public spaces, including a new lobby and upgraded banqueting facilities. For those seeking a true beach resort experience in The Hamptons, Gurney's delivers.

About HPR Entertainment
Jason Dudek is the founder of HPR Entertainment.  He has worked on over thirty motion pictures and founded the “Live from the Laugh Factory” comedy shows, a member of both the Director’s Guild of America and the Writer’s Guild of America.  Recently completed the Sci-Fi Feature, TOXIN, starring Danny Glover set for a 2015 theatrical release.  He is repped by Dan Norton of ICM Partners. Please email jasonrdudek@gmail.com for more information.