U.S. Senator Charles E. Schumer today called on the U.S. Navy and Northrop Grumman to immediately share data from their monitoring wells with all affected Long Island Water Districts. Schumer is urging the Navy and ... 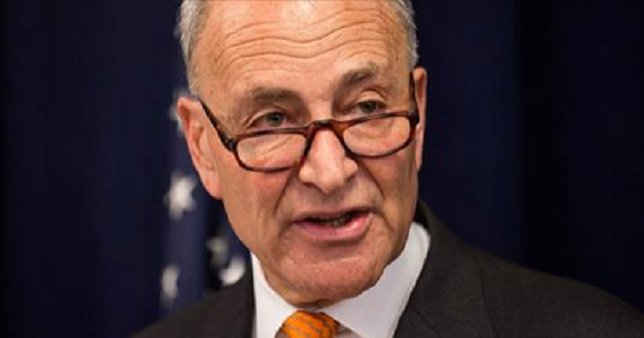 Long Island, NY - January 25, 2016 - U.S. Senator Charles E. Schumer today called on the U.S. Navy and Northrop Grumman to immediately share data from their monitoring wells with all affected Long Island Water Districts. Schumer is urging the Navy and Northrop Grumman to work closely with these water districts in order to define the reach of the plume and to remediate it.

Schumer today called for more transparency and information sharing between the U.S. Navy, Northrop Grumman and all Water Districts affected by the plume. Schumer explained that the U.S. Navy and Northrop Grumman are responsible for providing the resources needed to proactively manage the plume before it spreads to additional drinking wells.

“The U.S. Navy and Northrop Grumman must stop stonewalling and start sharing when it comes to information about potentially carcinogenic chemicals like TCE that show up in nearby monitoring wells and potentially threaten Long Islanders’ precious drinking water supply. They must be more forthcoming when it comes to information needed to help remediate the Bethpage plume and they need to be more proactive in cleaning up the mess they made” said Senator Schumer. “Once again, the Navy and Northrop Grumman have made things even more difficult for the Long Island Water Districts and ratepayers. Every day they fail to promptly share critical information is another day when this plume could creep closer to drinking water supplies. These impacted communities need and deserve timely information about the extent and content of the plume, and they need the Navy and Northrup Grumman to do more to remediate this toxic threat.”

At the press conference Assemblyman Joseph Saladino said, “It is obvious that the foot-dragging is an attempt by the responsible parties to stall the cleanup process and avoid the financial responsibility of removing the plume.  Each day this plume moves, increasing in size and contaminating uncontaminated portions of our precious and finite water supply.  During WWII and through the Vietnam War, Long Islanders were there for our American government and the protection of our country’s freedom.  It’s about time that the Navy, Grumman and our nation are here for us.  Clean water is too precious for this stalling.  Turn over the data, clean up the plume once and for all and do it now!”

“The responsible parties continue to show a lack of urgency in remediating and preventing additional impacts to public supply wells. In the  Navy and Grumman response letters to Massapequa Water Districts CSIA sampling request, they continue to deflect responsibility and place an added financial burden on the water suppliers and tax payers,” said Massapequa Water Commissioner Raymond Averna.

There are at least two plumes within the Bethpage community caused by the U.S. Navy’s decades-long operation of a Naval Weapons Production Facility. While there have been efforts to mitigate the effects of the plume, these efforts have continued to fall short, said Schumer. Specifically, elevated levels of a potential carcinogen,  trichloroethylene (TCE), an industrial solvent used at the former defense plant, was found in the area. Just recently, the Massapequa Water District requested data from the monitoring wells in an effort to protect the drinking water for the community they serve. But it has taken months for the Navy to review this request. Schumer said that all affected water districts should be granted access to data from these monitoring wells to help manage and prevent the spread of the plume. Senator Schumer was joined by New York State Assemblyman Joseph Saladino, who has consistently championed the issue of protecting ground water from the plume and passed legislation forcing the NYS DEC to prepare the data needed to effectively contain and clean up these dangerous chemicals.

The U.S. Navy operated a Naval Weapons Production Facility for decades beginning in the 1930’s, which has resulted in at least 2 plumes containing chemicals classified as carcinogens. Since 1976, when contamination concerns were first identified, the plume has spread and is currently threatening over 20 additional public drinking wells that serve over 250,000 Nassau County residents in Bethpage, Levittown, Massapequa, South Farmingdale and Wantagh.

There are at least two plumes currently within the Bethpage community, and contaminants were detected in five of the eight wells operated by Bethpage Water District. The first plume originated from the Grumman Aerospace Corporation and Navy manufacturing facilities, and the smaller plume is associated with the Bethpage Community Park where Grumman and the Navy disposed of wastes. The Bethpage Water District currently has 8,800 customers. Hot spots were recently discovered between Bethpage Water District Plant 6 and the GM 75 hotspot. Elevated levels of a potential carcinogen, trichloroethylene (TCE), were found in the groundwater 1,700 feet away from a Bethpage drinking water well. TCE is an industrial solvent and was used at the former defense plant in Bethpage, which was operated by Northrop Grumman and the U.S. Navy.