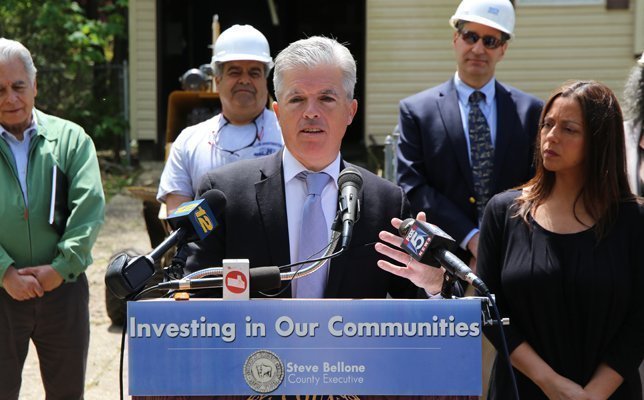 New York, NY - September 21, 2017 - Suffolk County Executive Steven Bellone was elected to serve on the Board of Directors of the New York State Association of Counties (NYSAC) at the Association’s Annual Meeting in Onondaga County last week.
“County Executive Bellone is an important county leader on Long Island and in New York State. His participation is critical as NYSAC continues to voice critical county concerns to State and Federal representatives,” said NYSAC President MaryEllen Odell, the Putnam County Executive. “His perspective on the board— sharing best practices and directing our advocacy efforts— will improve our ability to help counties and property taxpayers all over the state.”
NYSAC represents New York’s 57 counties and the City of New York in Albany and Washington on matters germane to county governments, and informs county officials and the public about issues that impact county governments across the state.
County Executive Bellone was first elected in 2011, and again in 2015. Previously he served as the Babylon Town Supervisor from 2001-2011. He is the 8th County Executive in county history. As county executive, Mr. Bellone has focused on saving taxpayer dollars, creating jobs, improving Long Island’s water quality, and enhancing the quality of life for Suffolk County residents.
“NYSAC is a critical vehicle for informing county and state leaders, and advocating for issues that impact counties across the state, including mandate relief, opioid addiction, water quality, public defense services, and raising the age of criminal responsibility,” said County Executive Bellone. “I am honored to be able to represent Suffolk County on the NYSAC Board and help to make New York a better place to live and work.”
"We welcome County Executive Bellone to the board of directors and we look forward to adding his ideas and leadership to our community of county leaders,” said NYSAC Executive Director Stephen Acquario.
The New York State Association of Counties is a bipartisan municipal association serving all 62 counties of New York State including the City of New York. Organized in 1925, NYSAC’s mission is to represent, educate and advocate for member counties and the thousands of elected and appointed county officials who serve the public. To learn more, visit www.nysac.org.