South Huntington Resident Lost His Battle with 9/11-Related Brain Cancer in May. 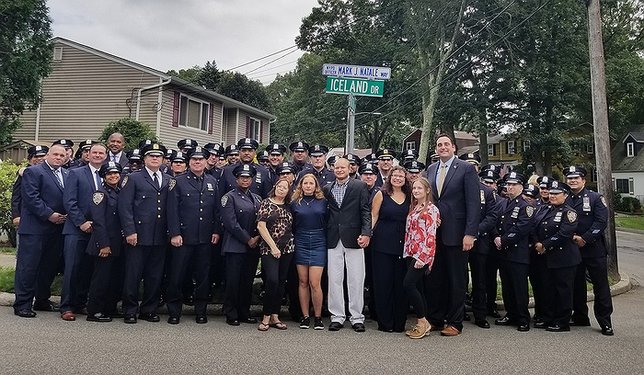 South Huntington, NY - Sept. 18, 2018 - Supervisor Chad A. Lupinacci, Councilman Mark Cuthbertson, Councilwoman Joan Cergol, Councilman Ed Smyth, Highway Superintendent Kevin S. Orelli and Tax Receiver Jillian Guthman were joined by Senator Carl L. Marcellino, Legislator William Spencer, Legislator Tom Donnelly, NYPD First Deputy Commissioner Benjamin B. Tucker, Commanding Officer Captain William E. Glynn of the NYPD’s 94th Precinct, officers from the 94th Precinct, family, friends and former colleagues of retired NYPD Officer Mark J. Natale, for a street dedication ceremony taking place in Officer Natale’s honor on what would have been his 56th birthday, Friday, September 14.
The ceremony opened with the presentation of the colors by the NYPD Honor Guard, followed by NYPD Police Officer Makiah Brown, who sang the National Anthem, and NYPD Chaplain Deputy Chief Monsignor David Cassato, who delivered the invocation.
“Not only are we gathered here to honor Officer Mark J. Natale on what would have been his 56th birthday, exactly one week ago was Mayra and Mark’s 27th wedding anniversary,” said Supervisor Lupinacci, who went on to explain how Officer Natale’s colleagues and community came together to honor his memory: “Friends and former colleagues contributed pieces of police uniform apparel so that retired Officer Natale would be buried in dress uniform; the South Huntington School District lowered their flags to half-staff district-wide, issued a service award posthumously and inducted Mark, a district employee during his retirement from the NYPD, into their Hall of Fame; while comments came pouring in on the Town's social media channels upon hearing news of this street dedication, with beautiful praise for Mark as a wonderful person, a gentleman, and words of comfort for the Natale family.”
“We as a nation have not spent enough time honoring and remembering the people who in the aftermath of 9/11 went into harm’s way to do their job, and ultimately paid the same supreme sacrifice with their lives as those who perished that day. Today we proudly recognize Officer Mark Natale as a hero,” stated Councilman Cuthbertson.
“9-11, as we are reminded more and more each day, is the tragedy that keeps on taking. 23 NYPD Officers were killed that day, and in the 17 years since then, nearly eight times as many, 156, have died from 9-11 related illnesses. We share in the Natale family’s grief and hope they will take comfort and pride each time they pass this street sign that is our way of making sure Mark’s service, heroism and sacrifice is held high for all to know and never be forgotten,” stated Councilwoman Cergol.
“I was proud and honored to be part of the street dedication for New York City Police Officer Mark J. Natale, a Huntington native and 9/11 hero whose memory will always live on,” said Councilman Smyth.
“NYPD Officer Mark J. Natale represents the best of humanity on a day we witnessed the worst. He is a hero, sacrificing his life protecting strangers. For the family, no words can ease their pain but we want them to know through this small gesture that they have the unending support of all of us,” said Senator Marcellino.
“As we mark the 17th anniversary of the horrific events of September 11, 2001, it is important to continue to recall not only those who perished on that day, but also to remember the uniformed and non-uniformed responders who answered the call to help. These individuals assisted in rescue and recovery efforts in the days, weeks and months that followed and, sadly as a result, many suffered from 9/11 cancers and other illnesses and lost their lives,” said Legislator Donnelly. “With this street renaming, NYPD Officer Mark J. Natale will never be forgotten for his selfless dedication, hopefully providing some comfort for his family.”
“It was a true privilege to join the late NYPD Officer Mark J. Natale’s family and the community for his street sign dedication. The words expressed by his wife Mayra, captured Mark’s service and heroism. His courageous battle serves as inspiration to those heroes who continue to struggle with 9/11 related illnesses every day. The awareness that Mark has brought to this issue will help ensure that our heroes receive the best possible care in the future,” stated Legislator Spencer.
“It was my honor to join the Natale family, friends, elected officials, neighbors and members of the 94 Precinct for the dedication of Iceland Drive in the name of NYPD officer Mark J. Natale, as a permanent memorial of Marks’ bravery and sacrifice,” said NYPD First Deputy Commissioner Benjamin B. Tucker.
Mayra Natale, Officer Natale’s widow, delivered a moving speech to close the ceremony with their children Dominick, Catherine and Lauren standing behind her, along with Officer Natale’s sisters Denise Pileggi, Debra Diem, and extended family, thanking everyone involved in honoring her husband’s memory, from the Town, and South Huntington School district officials to the NYPD and members of the Huntington community who came together to ease the burdens her husband and their family faced throughout his struggle with cancers related to his serving at Ground Zero.
Following the ceremony, Officer Natale’s family hosted a gathering on Iceland Drive celebrating his life.
NYPD Officer Mark J. Natale helped frightened and dust-covered people fleeing the devastation over bridges to Brooklyn and onto ferries to New Jersey following the terror attacks on the World Trade Center. He also stood guard at the gates around Ground Zero in the days that followed and worked in lower Manhattan for several months. Officer Natale tragically lost his long battle with 9/11-related brain cancer at his South Huntington home on May 4, 2018.
Iceland Drive in South Huntington was officially dedicated “NYPD Officer Mark J. Natale Way” in a resolution at the June 19 Town Board Meeting.