The defending Suffolk County Champion William Floyd Colonials varsity tennis team has started the season with a boom, making their presence known throughout the league with a 7-0 overall (6-0 league) record. 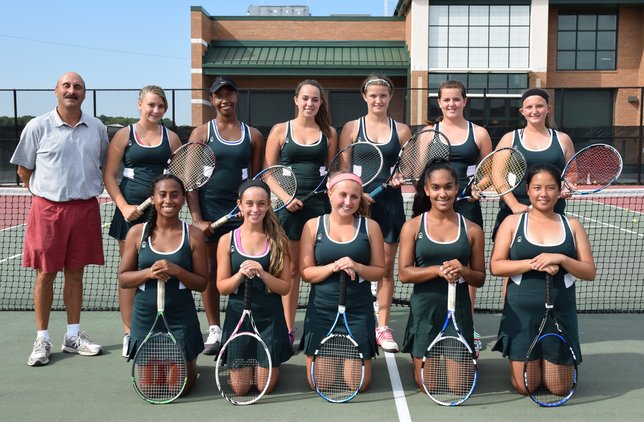 Mastic Beach, NY - September 18, 2015 - The defending Suffolk County Champion William Floyd Colonials varsity tennis team has started the season with a boom, making their presence known throughout the league with a 7-0 overall (6-0 league) record. Currently ranked No. 1, the Colonials once again put in the time, preparation, dedication and hard work throughout the summer with the goal of putting forth a strong title defense.

Under the expert tutelage of head coach Dave Pia, who was named the Newsday “Long Island Coach of the Year” and the United States Tennis Association Eastern Section Long Island Region Coach of the Year last season, the Colonials are looking for a team record 13th consecutive playoff berth and a fourth-consecutive appearance in the final four.

This year’s team includes returning players sisters Emily Fernandez and Brook Fernandez serving as the 1st and 2nd singles, respectively, followed by Zoe DaSilva as the 3rd singles, as well as Lisa Lin and Kaitlin Hibbert partnering as the team’s 1st doubles.

“This year we have seven new players that have never played varsity before come up from junior varsity who are doing a really great job too,” said Coach Pia. Five of those slots were open due to five graduating seniors – three of whom were all-state and two who received all-county honors.

New players to varsity this year include eighth-grader Alyssa Drell as the 4th singles; Kasey Hammel and Sarah Mazzarella as the 2nd doubles; Hailey Loughlin and Brianna Gonzalez as the 3rd doubles; and Delaney Kane and Chloe DeGrauw as the 4th doubles.

Coach Pia has his eyes on the playoffs and believes if the team can make the final four anything can happen. “That’s our goal right now – make the playoffs and do well and see if we can get there,” he said. “I’m optimistic. We got off to a nice start and I think we are going to have a really good season.”