County Government Building in Hauppauge to be Lighted Blue in Recognition of Prostate Cancer Awareness Month. 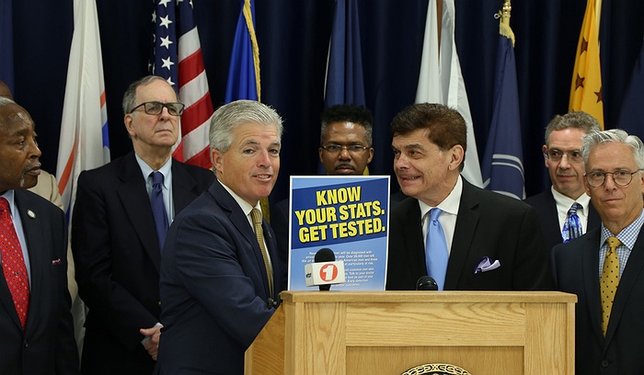 Suffolk County, NY - Sept. 17, 2018 - Suffolk County Executive Steve Bellone today announced the H. Lee Dennison Building in Hauppauge will be lit up in the color blue as part of promotional efforts to encourage men to get screened for prostate cancer for National Prostate Cancer Awareness Month. Suffolk County will also be embarking on a public service announcement as well as partnering with various hospitals and health clinics to incentivize early detection, prevention and treatment.
“In Suffolk County we are committed to raising awareness about Prostate Cancer and the importance of regular doctor checkups, testing, and consultation because we know that early detection can save lives,” said Suffolk County Executive Steve Bellone. “Talk to your friends, family, and loved ones today about the importance of getting checked and taking control of their health.”
The County Executive was joined by Dr. James Tomarken, Commissioner of the Suffolk County Department of Health Services, Dr. Howard Adler, Stony Brook University Hospital Director of the Prostate Care Program and Clinical Associate Professor of Urology, Dr. Johnny Kao, Good Samaritan Hospital Chairman of Radiation Oncology, Suffolk County Legislator Steven Flotteron and prostate cancer survivor Ed Randall, CEO and Founder of Ed Randall’s Fans for the Cure, a non-profit charity dedicated to promoting prostate cancer awareness and early detection.
Fans for the Cure has conducted more than 1,500 prostate cancer awareness days/nights at major league and minor league ballparks over the past nine baseball seasons, providing physician referrals and onsite PSA screenings to more than 5,000 men. Fans for the Cure seeks to save lives and preserve the quality of men’s lives by promoting the importance of identifying prostate cancer in its earliest stages. The charity encourages regular doctor checkups, testing, and consultation.
The statistics concerning prostate cancer are alarming. Prostate cancer is the most common non-skin cancer diagnosed among men who live in the United States, with 164,690 men expected to be diagnosed in 2018. That estimate from the American Cancer Society accounts for over 25 percent of the three major cancers, rated in terms of mortality rates, which afflict males across all age groups.
Prostate cancer is the second leading cause of cancer death in American men but awareness and early detection contributes significantly to the battle against this cancer.
Ed Randall, Founder/CEO, Fans for the Cure said, “Fans for the Cure is pleased to have been chosen to be part of today’s event with County Executive BELLONE. We look forward to supporting his team’s efforts to bring awareness and education about prostate cancer to the families of SUFFOLK County.”
Dr. Johnny Kao, MD, Chairman of Radiation Oncology at Good Samaritan Hospital Medical Center said, “I applaud County Executive Steve Bellone and Ed Randall for championing this cause. We’ve seen a 45% percent decrease in prostate cancer deaths in Suffolk over the last 25 years. This is due primarily to PSA screenings for men over the age of 50, but also events like this which raise awareness to the dangers of prostate cancer.”
Dr. Howard Adler, MD, FACS, Medical Director of the Prostate Care Program, said, “It was an honor and a privilege to participate with Suffolk County Executive Bellone and Ed Randall today in highlighting the importance of prostate cancer screening to the men and women of Suffolk County. As prostate cancer is the most common cancer in American men and the second most common cause of cancer death, it is important for men to discuss the PSA (Prostate Specific Antigen) blood test with their physician. The PSA test is an invitation to a conversation which allows men and their physicians to discuss further options for testing and, when necessary, treatment.”