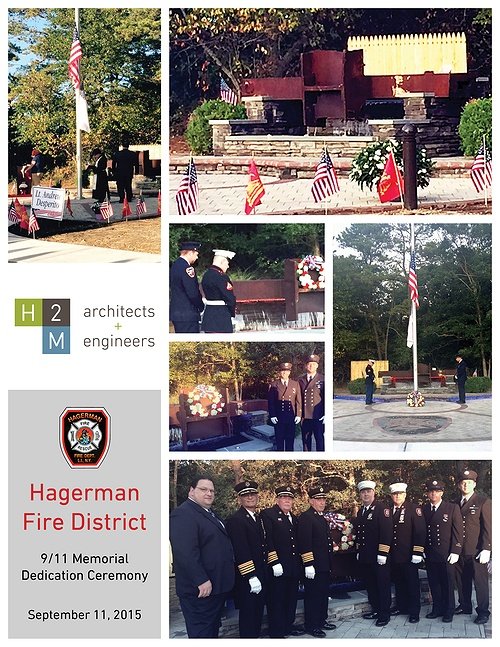 The memorial, which is located on the fire department’s grounds along Andrew Desperito Way in East Patchogue, was unveiled at a dedication ceremony and service on Friday, Sept. 11. It includes a 14-foot, seven ton section of steel that was salvaged from the World Trade Center and secured from the New York City Port Authority in 2011.

“The memorial was a vision and a dream that has now become a reality of epic proportions,” said Hagerman Fire Department Commissioner Carl Fargione. “It is a tribute to all those who were lost on that day, and a place for future generations to come reflect and memorialize those who were lost.”

“The 9/11 memorial developed by H2M is magnificent,” said South Country Ambulance Company Chief Greg Miglino. “It captures the essence of what a memorial for that day should be, and it was a privilege to be at the unveiling.”

On hand for the event were members of the Hagerman Fire Department and South Country Ambulance Corp., as well as New York-area firefighters and their family members, local residents, and politicians. In attendance on behalf of H2M was Director of Architecture Joe Mottola, architect Patrick Stone, and Director of Marketing Lori Anne De Iulio Casdia. In addition to attending as the project’s architects, it is important to note that Mr. Mottola and Mr. Stone also serve as volunteer firefighters for the Massapequa Fire Department and have a strong connection to the memorial.

“There hasn’t been a day that’s gone by where I, or people like me who lived through that day, don’t think about the events of 9/11,” Mr. Mottola said. “I expressed to Commissioner Fargione how much working on this project means to me as both an architect and fireman. I am grateful to have been involved in such a beautiful tribute to those who lost their lives on that day.”

“Being a firefighter and designing a monument such as this has tremendous meaning for me.  I am forced to take some of my emotions and turn them into something that will hopefully help people cope with the events, memories and hardships caused by the tragedy,” Mr. Stone said. “My hope is that the monument will benefit its visitors, and ultimately ensure that people never forget the events of that day.”

The project broke ground in May 2015, and consists of a decorative masonry monument with an integral water feature that holds the World Trade Center artifact. The water feature introduces a “living” portion of the monument, eliminating the silence to create a soothing background noise. The water flows from behind the Artifact and splashes below it, creating a reflecting pool.

The monument is surrounded by a decorative paver layout in the shape of a Maltese Cross, and includes the department’s patch made out of pavers and a 30-foot flagpole centered in the cross. The site is accented by LED lighting throughout, and will be landscaped and include benches once complete.

The memorial is dedicated to lieutenant of FDNY Engine Company 1, Andrew Desperito, who was a member of the Hagerman Fire Department, along with all those who lost their lives on Sept. 11, 2001.

About H2M
H2M is a full-service consulting and design firm offering the expertise of more than 290 architects,  engineers (water supply, civil/site, structural, M/E/P, wastewater and environmental), planners, designers, inspectors, surveyors and scientists. H2M meets the challenges associated with buildings and infrastructure and has been serving various markets throughout Long Island, New York, New Jersey, Pennsylvania, and Connecticut for over 80 years.  For more information, please visit www.h2m.com.