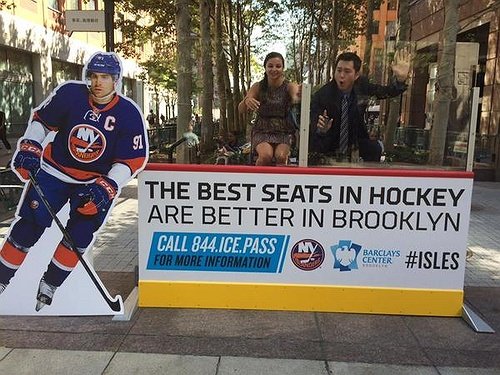 The unprecedented presentation will consist of a life-size dasherboard, glass and seat setup, built to the exact scale at Barclays Center. Fans who visit the display will be able to sit in the seats, and experience the unmatched sightline of an Islanders game firsthand.

Barclays Center’s glass seats are unique to any other NHL venue. Positioned three feet higher than average front row seats, the boards start at knee-level, giving fans the perspective of being on top of the action on the ice.

The Islanders will open their inaugural season in Brooklyn on October 9 vs. the Chicago Blackhawks.

MetroTech Center is accessible via the A, C, F, and R subway lines to the Jay St.-MetroTech stop and the 2, 3, 4, and 5 trains to Borough Hall.