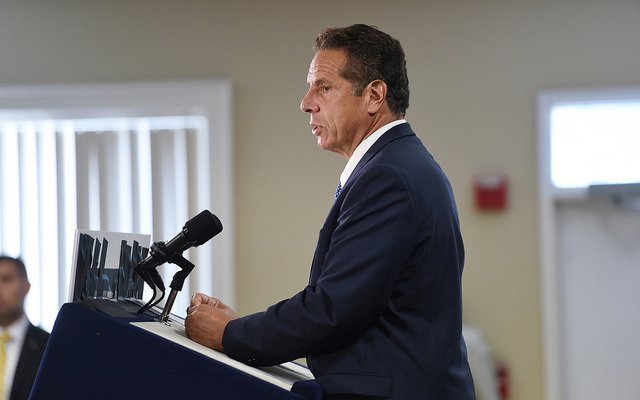 Albany, NY - September 15, 2017 - Governor Andrew M. Cuomo will travel to the U.S. Virgin Islands on Friday, September 15 to survey the damage caused by Hurricane Irma. The assessment tour and recovery mission comes after Governor Mapp requested that Governor Cuomo travel to the region to survey the damage. Governor Cuomo pledged to identify how New York can best provide additional assistance to the impacted area as they begin the recovery process.
Hurricane Irma hit the U.S. Virgin Islands on September 6th, leaving St. Thomas and St. John heavily damaged after powerful winds at speeds greater than 150 miles per hour. Much of St. Thomas and St. John has been devastated and still remains without power as residents struggle to recover from the storm.
"New Yorkers stand with the U.S. Virgin Islands in their time of need, and it's important to understand the full scope of the destruction in order to provide the kind of targeted assistance that will help the victims of this storm get back on their feet," said Governor Cuomo. "We not only have assets, but valuable experience on how to rebuild and recover following the devastation of Hurricane Sandy, and we are going to help in any way we can."
Governor Mapp said, "In the wake of Hurricane Irma, I invited Governor Cuomo to the US Virgin Islands to tour the damage and assist in our recovery effort. I want to thank the Governor, who has extensive experience in post storm recovery both from his time as HUD Secretary and as New York State Governor in the aftermath of Hurricane Sandy, for partnering with us in the immense task we have ahead. We have a special connection with New York, as more US Virgin Islands residents list their place of birth as New York than any other state in the nation.  As someone who was born in Brooklyn and served in the 83rd precinct on Wilson avenue, I understand the resiliency and can-do attitude of New Yorkers, and we appreciate Governor Cuomo's promise of assistance as we work together in our effort to build back better and stronger."
Governor Cuomo will be traveling with "an assessment team" from the administration to survey the damage and advise on deploying assets.
New York and the U.S. Virgin Islands share a special connection. More US Virgin Islands residents list their place of birth as New York than any other state in the nation. Governor Mapp was born in Brooklyn, New York, and attended both New York City Community College and the City University of New York.
This trip is not the first assistance offered by New York to the U.S. Virgin Islands in the wake of Hurricane Irma. In the immediate aftermath of the storm, Governor Cuomo deployed 130 Airmen  from the New York Air National Guard's106th Rescue Wing, three HH-60 Pave Hawk rescue helicopters, and two HC-130 search and rescue aircraft and three Zodiac inflatable rescue boats to assist with initial search and rescue efforts. This initial mission concluded earlier this week.
Since Hurricanes Harvey and Irma hit Texas, Florida and the Caribbean, New York State has continued its support to areas impacted by these storms. On September 11, 10 UH-60 Blackhawk Helicopters and 55 soldiers from the New York Army National Guard's 42nd Combat Aviation Brigade deployed to assist in the Hurricane Irma response in Florida. Additionally, Airmen from the 105th Airlift Wing deployed a satellite communication team with seven personnel to Mississippi using a C-17 aircraft on Sunday, September 10 as part of the Hurricane Irma response and support for the Florida National Guard. 124 Airmen from the 106th Rescue Wing of the New York National Guard were deployed to Texas following Hurricane Harvey and separately to Puerto Rico following Hurricane Irma.