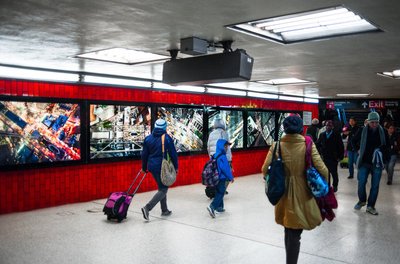 Commuters at the Bowling Green subway station in Manhattan will have a new art display as part of their daily trek thanks to the Metropolitan Transportation Authority Arts for Transit and Urban Design.

The photography of Navid Baraty was selected for the exhibition, of which seven large photographs showing a bird’s-eye view of New York City have been put on display. Baraty’s collection, titled “Intersection,” provides a thrilling new angle on the city, and allows lookers to see downwards into the city as opposed to looking up.

“Everyone walks around Manhattan looking up at the giant skyscrapers, but very few get the chance to look down from so many different vantage points,” said Baraty in an MTA press release.

Baraty went to unusual measures to get the perfect shot.  He strapped a camera to his wrist and leaned out of windows and ledges in order to get photos of the busy Manhattan intersections below.  He even captured images from the Macy’s Thanksgiving Day Parade to show the balloons from above.

The photographs are angled downward, while viewers in the station look straight on, which adds to the effect of the heights and depths depicted in the images.  The light in the images also shifts to provide daytime and nighttime views of the city.

“The Lightbox Program lets us showcase a variety of photographers and a wide range of work;  Navid Baraty’s work has an excitement and adventurous spirit that lets our riders feel as if they are scaling the rooftops as they traverse the city, underground,” said Lester Burg, Senior Manager for MTA Arts for Transit and Urban Design. “Too often, as we race around the city, we forget the magnitude and the scale of Manhattan. Placing these photographs in the subway station used by the many visitors to Lower Manhattan area landmarks – Ellis Island and the Statue of Liberty among others-offers a fascinating glimpse and bird’s eye view where people, cars and buses intersect with our urban architecture.”

“Intersection” will remain on view through 2014.