Eddie Amodeo of Calverton discovers a rare piece of sports memorabilia at a local yard sale, and it is now on exhibit at the Baseball Hall of Fame in Cooperstown, NY. 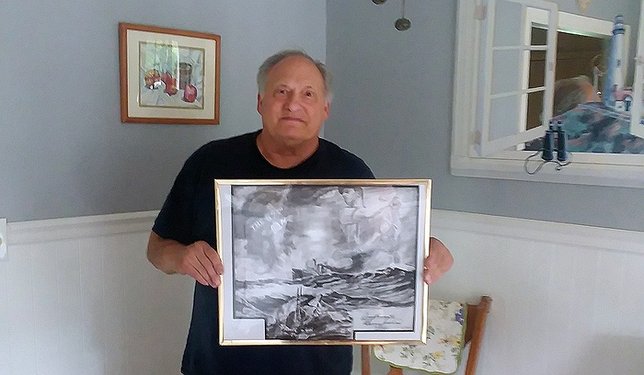 Photo by: Courtesy of Eddie Amodeo

Calverton, NY - Sept. 14, 2018 - Eddie Amodeo, a disabled war veteran currently living in Calverton, ventured out one morning in 2007, a selection of garage sales mapped out for the first half of the day. Yard “sale-ing” (as if that were a verb) was an adventure of sorts. As an avid collector of sports memorabilia, mementos, and antiques, searching for hidden treasures had become an exciting hobby.
That day Eddie happened upon a yard sale that looked like most he visited – assorted housewares, dusty hobbyist gear, games, and other trinkets he enjoyed poking through. As he sifted and sorted, something interesting caught his eye. It was a poster, a cartoon drawing of the USS Yankee Clipper and the USS Cleveland submarine. But upon a closer look, he realized there was an image of Joe Dimaggio in the sky above, a surreal vision formed by the wisps and folds of white opaque clouds.
Eddie looked over the poster and asked the woman who was running the yard sale how much it was. “She said the poster was $5,” said Eddie. “I asked her if she would settle for $2, and she did.”
The woman went on to explain that the poster was her grandfather’s, and she had found it among his things after he passed away.
When Eddie got home he couldn’t stop thinking about the poster. Where had it come from? Who was the artist? Surely it had some further meaning and might even be worth something, he thought to himself.
Eddie was determined to find out more, and reached out to Joe Dimaggio’s grandchildren, Jim and Paula Hamra. After an introduction and brief conversation, Eddie discovered that the poster actually depicted Joe Dimaggio’s 57th game, capturing his immortalized winning streak ending. The 16x18 piece was done by Burris Jenkins the day after the game, July 18,1941.
Eddie stayed in touch with the Dimaggio grandchildren, and they finally referred him to Morris Engelberg, Joe Dimaggio’s estate lawyer, author, and good friend of Joe. After some quibbling with Morris about ownership of the poster as well as references to the need for a licensing agreement, they came to a mutual consent that Eddie had rights to the poster and that it was indeed his to keep. “We went back and forth for some time,” explains Eddie. “But now we are on the same page, and we are now known as Big Moe and Little Moe.”
In 2009, Eddie donated the piece to the Baseball Hall of Fame in Cooperstown, NY. Finally, after all these years, he is proud to say it is on display for baseball fans everywhere to see and enjoy.
Eddie has a number of other art pieces and memorabilia in his possession that he’s collected over the years, and his goal is to donate a limited number to museums, exhibits and other organizations and give all proceeds to children’s and veteran’s charities. Eddie has an affinity for children with health issues due to his similar background. “As a child I too was very sick, and now I'm a disabled Vietnam who was injured in combat. I want to give back, and this will help me do so.”
If anyone is interested in learning more about Eddie’s collection, he can be reached via email at amodeoedward@yahoo.com.