A resident of Bayville, New York, Jim Giaccone is in the running to win the Award's $100,000 grand prize donation to Tuesday's Children. 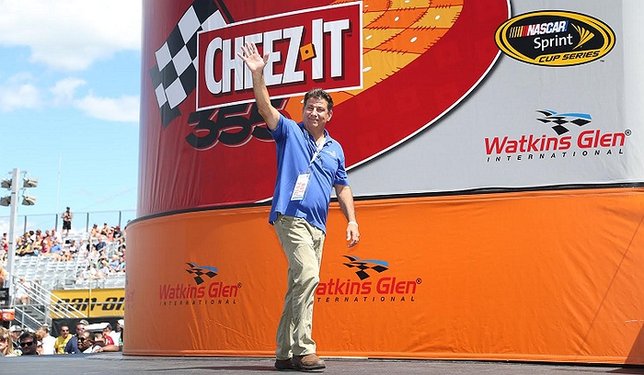 Jim Giaccones, of Bayville, walking across the pre-race stage in Watkins Glen, NY. He was introduced to the crowd as part of pre-race ceremonies for the Cheez-It 355 at The Glen.

Bayville, NY - August 17, 2016 - A resident of Bayville, New York, Jim Giaccone was selected as one of four national champions for children for The NASCAR Foundation's 2016 Betty Jane France Humanitarian Award presented by Nationwide. Giaccone is in the running to win the Award's $100,000 grand prize donation to Tuesday's Children.

Jim Giaccone lost his older brother, Joseph, in the attacks on the World Trade Center on Sept. 11, 2001.  Joseph was one of the 658 employees of the Cantor Fitzgerald financial services firm who died in the attacks. Jim grieved the loss of his brother, but knew that the best way to honor him was by giving back to others - especially children - who also were affected by the tragedy.

Jim focused his time and energy into Tuesday's Children, an organization founded in 2001 and dedicated to providing long-term support to those directly impacted by the events of 9/11 and other communities impacted by terrorism and traumatic loss.

As a mentor to teenage brothers Nicholas and Matthew Reda, who lost their father on 9/11, Jim and the boys find healing and comfort in one another.  Jim's friendship and guidance has been a positive influence on the development of the two boys.

More than 10 years and hundreds of hours of service to Tuesday's Children have given Jim many rewarding experiences.  With no sign of slowing down in sight, Jim has expanded his volunteer efforts to include helping others both domestically and abroad because he lives by the organization's motto to "Let Our Past Change the Future."

“We could not be more proud of Jim,” said Terry Sears, Executive Director of Tuesday’s Children.  “He is truly deserving of this esteemed honor.  He gives so much of his time to Tuesday’s Children.  Jim embodies what it means to be a mentor and so successfully exhibits the Tuesday’s Children long-term healing model. By helping Nicholas and Matthew cope with the loss of their dad, he is helping to heal himself. Thank you, Jim, for your magnificent dedication to our organization.”

Giaccone said, “I am so humbled to have received this wonderful recognition.  Giving my time to Tuesday’s Children is such a good way for me to make a positive contribution from such a terrible tragedy. Although nobody can ever replace their loved one, I hope the time we’ve spent together will help Nicholas and Matthew throughout their lives. In a sense, we’ve really mentored each other.  I am so grateful to Tuesday’s Children and hope that, with your votes, I will be able to bring home the grand prize for them so that we can continue to bring even more positive into the lives of so many who have suffered so much.”

The Award is given annually to a dedicated individual that has made a profound impact on the lives of children in his or her local community. The Award honors the unwavering commitment that The NASCAR Foundation's Founder and Chairwoman Emeritus, Betty Jane France, has demonstrated through philanthropy and community service.

The Award presentation will take place on September 27 at The NASCAR Foundation Honors Gala in New York City. The winner will be awarded a $100,000 donation to the charity he or she represents.

New Yorkers are encouraged to vote for Jim with Tuesday's Children by visiting here between now and 5:00 pm ET on September 26. Fans are also encouraged to join the conversation on Facebook and on Twitter using the hashtag #BJFHAward.