William Floyd will induct its 7th class of Athletic Hall of Fame honorees at a ceremony on Saturday, December 14. 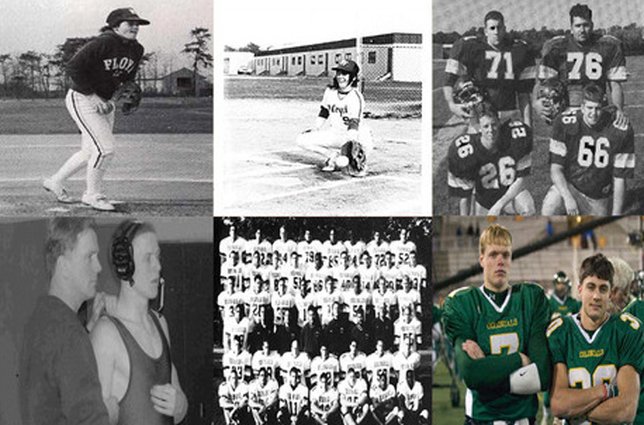 Mastic Beach, NY - December 12, 2013 - On Saturday, December 14, the William Floyd School District will recognize and honor six former standout William Floyd athletes and the 2001 William Floyd Colonials football team, the school’s first football team to win the Suffolk County Championship at the 7th annual William Floyd Athletic Hall of Fame induction ceremony. The festivities are scheduled to be held in the high school’s junior-senior cafeteria at 12 pm and the honorees will be introduced to the crowd in the John Pidgeon Gymnasium during a break from match play at the annual “Take Down Autism” wrestling tournament, which itself has raised more than $25,000 for Autism Speaks since its inception seven years ago.

In addition to the 2001 Colonials football team, the six individual athletes to be inducted into the William Floyd Hall of Fame include: Catherine (Pugliese) Honeyman (1987), field hockey, basketball and softball; Jennifer Engmann (1988), softball; John Papadakis (1996), football; Philip Archer (2003), wrestling; and in their first year of eligibility, Brock Jackolski (2008), football and track; and Joseph Sidaras (2008), football.

“The William Floyd Athletic Hall of Fame serves as a way to recognize the athletes of the past and their tremendous athletic accomplishments,” said Mark Mensch, Athletic Director, William Floyd School District. “These six individuals and the members of the 2001 Suffolk County Champion football team serve as a source of pride and inspiration for the student athletes of today. They are true role models and we are very proud to induct them into the William Floyd Athletic Hall of Fame.”

To be considered for this honor, nominees must be alumni of William Floyd High School and have exhibited both excellence and sportsmanship in wearing the Colonial green. They also must have graduated from William Floyd at least five years ago. The annual Hall of Fame induction ceremony, sponsored by the William Floyd Alumni Association, is designed to recognize former outstanding athletes and role models of the past while strengthening the bonds between the community, the district and its alumni.

The induction ceremony and luncheon will be held at 12 pm on Saturday, December 14 in the William Floyd High School senior cafeteria. The cost to attend the luncheon is $25 per person, children six to 12 cost $12 and children under six are free. The inductees will be introduced at 1:30 pm during the “Take Down Autism” wresting tournament. For further information, please call (631) 874-1201.