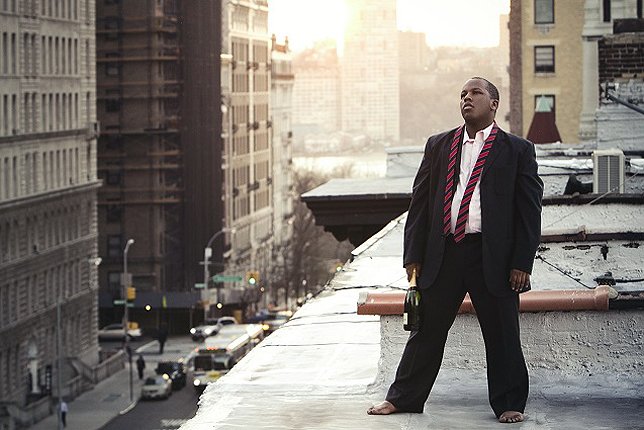 White Girl In Danger is a dark musical comedy about Keesha Gibbs, an African-American teen who lives in the “blackground” of an all-white world of a 90s era melodrama and seeks to prove she’s just as much of a protagonist/heroine as Meagan, Maegan, and Megan, the white girls who battle issues such as drugs, alcohol, abusive boyfriends, eating disorders and finally, a serial killer who has been murdering the town’s white girls one by one. Inspired by classic 90s movies-of-the-week such as She Cried No, Friends ‘Til The End and Mother, May I Sleep With Danger? The cast for White Girl in Danger includes LaToya Edwards, LaDonna Burns, Molly Hager, Christiana Cole, Bonnie Milligan, Liz Lark Brown, Eric William Morris, Sarita Lilly, Rheaume Crenshaw and Larry Hamilton. This performance will be directed by Tamilla Woodard with music direction by Darius Smith.

Says Jackson of his work: “My mission as a musical theater writer is to make work that is utterly challenging and completely accessible. I aim to write stories and songs that amplify ideas that are titillating and outrageous. One of my favorite quotes from literature is from Herman Melville when he says ‘Woe to him who seeks to please rather than to appall.’ I’m greedy and want to do both. I don’t believe in binaries; I just believe in holding a mirror up to life and telling the truth.”

Michael R. Jackson holds a B.F.A. and M.F.A. in playwriting and musical theatre writing from the NYU Tisch School of the Arts. As a songwriter, he has seen his work performed at NAMT, The 24 Hour Musicals, The Barrington Stage Company, Merkin Hall, the Laurie Beechman Theater, Feinstein’s/54 Below, The Triad, Ars Nova, Joe’s Pub, The Metropolitan Room, The Bruno Walter Library and ACT in Seattle. He wrote the book, music and lyrics for the musical A Strange Loop. He wrote the book and lyrics for the musical Only Children with composer Rachel Peters, book and lyrics for the musical adaptation of the 2007 horror film Teeth with composer and co-bookwriter Anna Jacobs and is currently writing book for the musical U.G.L.Y. with composer-lyricist Darius Smith. He is an alum of the Johnny Mercer Writers Colony and the Ars Nova Uncharted Writers Group and is a Sundance Theatre Institute Composer Fellow. He is a 2016-2017 Dramatist Guild Fellow. He has been commissioned by LCT3 and UARTS. TheLivingMichaelJackson.com.

The Larson Legacy Concert Series at the Adelphi PAC celebrates the next generation of artists at the college home of the creator of the Pulitzer Prize-winning musical RENT Jonathan Larson (’82). Each year, the American Theatre Wing presents emerging creators of musical theatre with The Jonathan Larson Grants. Each year, select recipients of these grants will be showcased at the Adelphi PAC in this series to help nurture and support the next generation of creative artists to carry on Jonathan Larson’s legacy. Past recipients of these grants have gone on to create the Broadway musicals Dear Evan Hansen, Natasha, Pierre and the Great Comet of 1812, A Gentleman’s Guide to Love and Murder, Grey Gardens, Next To Normal, Elf, Hands on a Hardbody, A Christmas Story and many more.

The Adelphi PAC is one of Long Island’s premier cultural arts venues for entertainment of all kinds. Tickets are currently on sale for $25 with discounts are available to seniors, students and alumni. Information is available at the Lucia and Steven N. Fischer Box Office at 516.877.4000 or boxoffice@adelphi.edu. Regular box office hours are Tuesday through Friday from 1:00-6:00 p.m. The box office is also open two hours before most scheduled performances.

More than 100,000 Adelphi graduates have gained the skills to thrive professionally as active, caring citizens, making their mark on the University, their communities and the world beyond.