Long Island University Lockout of Faculty is Over

An agreement will immediately return students and faculty to their classrooms. 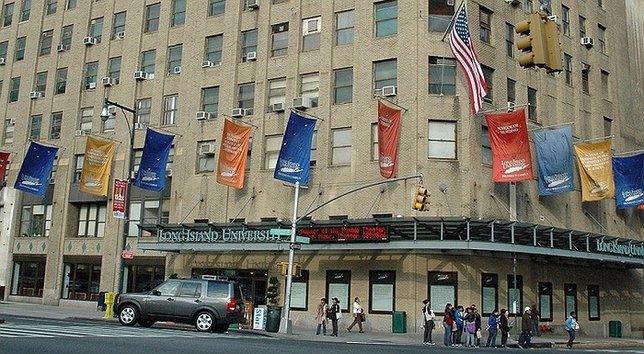 The agreement ends the administration’s lockout immediately. The LIUFF contract that expired on Aug. 31 will be extended to May 31, 2017, to allow more time to bargain for a fair contract.

Photo by: The Squirrels / Wikis Take Manhattan, license under CC-BY AS A 3.0 Unported.

Brooklyn, NY - September 14, 2016 - The Long Island University Faculty Federation, with the full support and backing of its national affiliate, the American Federation of Teachers, and its state affiliate, New York State United Teachers, has secured an end to an unprecedented 12-day faculty lockout imposed by the LIU administration. The battle, which extends the faculty’s expired contract to May 31, 2017, was a hard-fought win for the staff and students they serve. The agreement will immediately return students and faculty to their classrooms.

After faculty were locked out at the start of Labor Day weekend, students, faculty, organized labor, elected officials and the academic community around the country rallied to the cause, mobilizing in the hundreds each day to defend the right of students to receive a high-quality education.

The agreement ends the administration’s lockout immediately. The LIUFF contract that expired on Aug. 31 will be extended to May 31, 2017, to allow more time to bargain for a fair contract.

LIU has accepted the union’s proposal to engage a mediator, and the LIU administration will make formerly locked-out faculty whole for healthcare costs incurred during the lockout period. The union’s unfair labor practice complaints relating to the lockout and a pending arbitration on pay parity remain active and will be pursued.

AFT President Randi Weingarten said: “This is a huge win for the 8,000 LIU Brooklyn students who have a right to a real education taught by their real professors after two school weeks of uncertainty, and it is a huge step for dignity and respect for those educators. The administration’s actions in locking out faculty and depriving their students of their educators were as contemptible as it was unprecedented.

“With their futures on the line, students refused to be used as pawns. They rallied to their professors’ cause, walking out and speaking out for the education they deserve and have paid for. While the terms of the new contract are still to be negotiated, and will be the subject of intense bargaining, we will fight for faculty to achieve equity with their peers and for adjuncts to be treated fairly given the vital work they do every day to help students realize their dreams.”

LIUFF President Jessica Rosenberg said: “The whole LIU Brooklyn community, and the larger labor community of New York City, the state and the nation, came together to tell the administration to end this lockout. After 12 days of intransigence, the LIU administration discovered that denying students the education they deserve is never a successful strategy. The LIU faculty is relieved this is over and is looking forward to immediately returning to the classroom to get started with the semester. We look forward to a productive outcome as bargaining progresses in the coming weeks.”

The American Federation of Teachers is a union of 1.6 million professionals that champions fairness; democracy; economic opportunity; and high-quality public education, healthcare and public services for our students, their families and our communities. We are committed to advancing these principles through community engagement, organizing, collective bargaining and political activism, and especially through the work our members do.