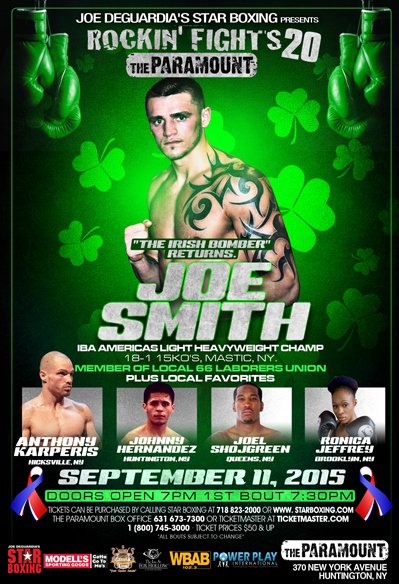 Watching the video and seeing the man described as a tourist / Irish professional boxer deck one of the attacking mob with a single shot, Smith's natural punching power quickly came to mind.

Smith, 25 years old from Mastic, Shirley Long Island, is a talented professional boxer who comes from a impressive amateur career, including two New York Gold Glove and four New York Metro titles. Smith who carries the moniker "The Irish Bomber" because of his raw punching power is 18-1, 15Ko's as a pro . Thats a 80% KO ratio higher than that of greats like Marvin Hagler and Stanley Ketchel .

The lethal punching Smith, kicked off his pro career October 2009 with a first round stoppage of David Brown, running off seven straight KO wins before suffering his first and only defeat August 2010 suffering a freak 4th round TKO loss to Lawrence, Massachusetts, banger Eddie "Thunder" Caminero.

The Caminero loss labeled as "freak" because after dominating the first round and all but the last twenty seconds of the second the Smith hit by a "Thunder" combination never wobbled or showed he was injured until  the sturdy gladiator was examined by the ringside doctor between rounds.

Unknown to the all ringside Smith, displaying more courage and heart than anyone not carrying an M-16, the young Irishman went on to fight and win most of the next six minutes before succumbing to the pain after being shouldered in a clinch from what was diagnosed later that evening as a double fractured jaw.

Following surgery and a liquid diet Smith returning to action eleven months later would rebound winning his next five inside the distance before then being forced to go the distance in his next three bouts scoring dominant point wins over Hamid Abdul-Mateen, Lamont Williams and Sacramento, California's cagey veteran Otis Griffin.

The "Irish Bomber" would return to his KO ways March 2014 stopping Michael Gbenga, Tyrell Hendrix, Maxell Taylor and Cory "Black Ice" Cummings in his last bout this past April.

Evaluating the whole package, Smith with his composed aggressive style, impressive offensive skills, tight defense and "steel" tested chin, parlayed with his natural punching power it shouldn't be long before he makes his way to big name fights at the upper echelon of the light heavyweight division.

News Update: Turns out it has been miss reported that tourist in the above video was Irish, nor is he a professional boxer but is a Kuwaiti-born "Irish citizen" named Mohammed Fadel Dobbous with no professional boxing experience. That said, there is no doubt that Smith Jr. a second generation product Irish immigrants runs green inside and out. Nor is there any question of the high quality boxing skills and pulverizing power represented in his impressive record.

Better idea, get your ticket and come see for yourself September 11th when "The Irish Bomber" takes on Flint, Michigan's, Shujaa El Amin in the main event of Joe Deguardia's Star Boxing Rockin Fights 20 card at Paramount Theatre, in Huntington, New York.