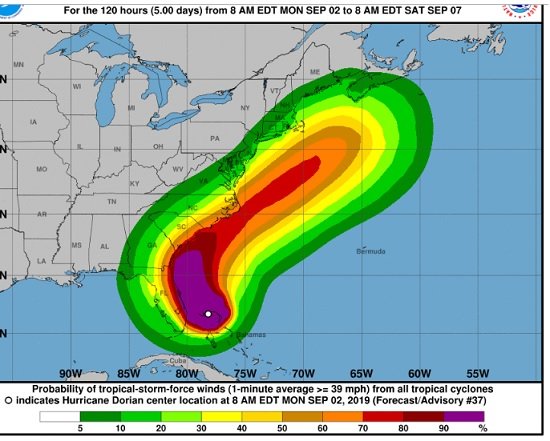 Hurricane Dorian hit parts of the Bahamas, wreaking havoc, but left other parts of the islands largely out of its path.

Hurricane Dorian hit the Bahamas hard, wreaking havoc in parts of the region, while Atlantis Paradise Island, located in the Bahamas, and some other portions of the archipelago were spared from the wrath of this cataclysmic weather event.

The Category 5 hurricane struck the town of Marsh Harbour on Great Abaco Island after hitting Elbow Cay, causing floods and damage in parts of the Bahamas.

Thirty deaths in the Bahamas, largely at Great Abaco Island and Grand Bahama, were attributed to the hurricane by Thurday with the toll expected to rise.

"We have hundreds of persons on our island who are homeless. Kwasi Thompson, minster of state for Grand Bahama. "About four hundred are in shelters. We had flood waters 20 feet high. The complete island is out of power and out of water."

The Miami Herald reported that winds and water struck and flooded the Abaco Islands, while other buildings lost roofs and parts of Hope Town were leveled.

But portions of the Bahamas averted a direct hit by the hurricane: The Bahamas Ministry of Tourism indicated that resorts and attractions on Nassau and Paradise Island were all open as of Sunday.

"We are grateful that New Providence and Atlantis Paradise Island were not severely impacted by the storm," Audrey Oswell, the resort's president, said in a written statement. "However, several of the family islands in northwestern Bahamas are experiencing devastating life-threatening conditions."

She said that the Atlantis is working with The Bahamas Red Cross and Chef José Andrés' World Central Kitchen "to provide much needed relief, including food and supplies to the residents of Abaco, Grand Bahama and others in the Bahamas who were affected."

Atlantis Paradise Island itself is a massive resort with more than 3,000 guest rooms, 7,500 employees, 141 acres of water, the world’s largest open-air marine habitat (Explore Aquaventure),  an 18-hole golf course, casino , more than 700,000 square feet of meeting space and other facilities.

“The effects of Hurricane Dorian will vary greatly,” Bahamas Ministry of Tourism and Aviation Director General Joy Jibrilu said on Sunday. “While we are relieved that most of the nation will be unaffected, we are deeply concerned about our neighbors in The Abacos and Grand Bahama Island.”

The Bahamas is an archipelago with more than 700 islands spread over 100,000 square miles. Weather.com's report for Pradaside Island on Monday indicated "light rain," while another weather report for that island was simply "possible light rain and windy."

“A prolonged period of catastrophic winds and storm surge will continue to affect Grand Bahama Island through today and tonight,” the National Hurricane Center indicated . “Everyone there should remain in shelter and not venture into the eye.”

The hurricane continued to move slowly after hitting the Bahamas, prolonging the impact on regions that were hit hardest.

Oswell in a written statement said those who want to help could donate to the Atlantis Bahamas Hurricane Dorian Fund, a GofundMe campaign that indicated "Atlantis was not affected."

She added that "100 percent of the proceeds" from the fund would be donated to the Baham0s Red Cross "to help with the recovery efforts in the Bahamas."

More than $100,00 had been raised from nearly 300 donors to the Atlantis Bahamas Dorian Hurricane Relief Fund.

"I donated because my home was affected by hurricane Sandy in 2012 and I know the devastating feeling of losing a home," Catherine Burns said on the fundraising page as part of a donation ."My prayers and positive thoughts are being sent to everyone affected by Dorian."

"I had worked for years at Atlantis and it holds a dear place in my heart," Doris Clark said along with another donation. "My heart goes out to those affected by Dorian."

The Atlantis Paradise Island has a hurricane guarantee policy that kicks in when a hurricane watch or warning is issued by the United States’ National Hurricane Center up to 14 days prior to visitors’ anticipated arrival.

It applies to travelers’ cities of origins and New Providence, The Bahamas. Guests with confirmed reservations can cancel their reservation up to the moment of departure.