Governor Cuomo issued Executive Order No. 147, which appoints the New York State Attorney General as a special prosecutor in matters relating to the deaths of unarmed civilians caused by law enforcement officers. 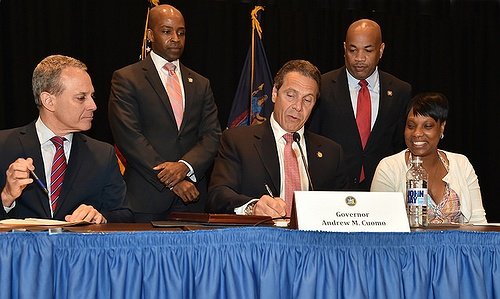 Albany, NY - July 8, 2015 - Governor Cuomo issued Executive Order No. 147, which appoints the New York State Attorney General as a special prosecutor in matters relating to the deaths of unarmed civilians caused by law enforcement officers. The order also allows the special prosecutor to review cases where there is a question whether the civilian was armed and dangerous at the time of his or her death. The Governor signed the Executive Order this afternoon at CUNY John Jay College of Criminal Justice in New York City accompanied by dozens of community advocates and elected officials who have been pushing to strengthen the criminal justice system in New York.

Gwen Carr, mother of Eric Garner; Constance Malcolm, mother of Ramarley Graham; Iris Baez, mother of Anthony Baez; Hawa Bah, mother of Mohamed Bah; Margarita Rosario, mother of Anthony Rosario and aunt of Hilton Vega jointly said: "For decades, our families and those of other New Yorkers killed by police have faced repeated injustices, not only losing family members to police violence by those tasked with serving and protecting but also being failed by local district attorneys not holding officers accountable to the law for those deaths. Many of us have been calling for a special prosecutor for decades, so this reform stems from the legacies of New Yorkers whose unjust deaths go back a long time and the leadership of our families. Today, Governor Cuomo is listening to our voices of and those of other New Yorkers who support equal justice to enact an important reform to end this conflict of interest. Nothing will bring back the lives of our loved ones, and this was never simply about our families – it was about all those who come after us because we so deeply understand the pain and heartache of losing a loved one and then having their life not matter within our justice system. While New York takes national leadership with this reform, there remains much work to be done to ensure our children and family members are no longer unjustly killed by police in the first place. We hope to work with Governor Cuomo and other leaders in moving New York forward to build upon today’s important step to end the discriminatory and abusive policing that threatens our families and communities."

Dr. Hazel N. Dukes, President of NAACP New York State Conference said: "This is a significant executive order that will ensure that communities of color including African Americans, Latinos and other minorities are protected from police misconduct. With this order a special prosecutor will have the power to review, investigate and prosecute cases where unarmed civilians are killed. We thank Governor Andrew Cuomo for his vision and commitment to protect all our communities."

Russell Simmons said: "I applaud Governor Cuomo for living up to his promise to sign an executive order appointing a special prosecutor for cases involving the deaths of unarmed civilians by law enforcement. This show of leadership by Governor Cuomo should spark a shift across the entire country, where every state has special, impartial prosecutors that investigate these cases. There is a dire need for broad reform of the criminal justice system in order to restore the trust between the community and law enforcement, and I believe this is a step in the right direction. However, I urge the New York State legislature to pass comprehensive reform when they return to session."

Michael Hardy, Executive Vice President & General Counsel of National Action Network said: "This executive order is exactly what we needed in New York to guarantee that cases of police-involved civilian deaths are investigated to the fullest extent of the law. I want to applaud Governor Cuomo for taking this step, because it is one that our state – and our nation – needed greatly. Next, I hope that other states will follow our lead to bring trust back to the judicial system."

Soffiyah Elijah, Executive Director of the Correctional Association of New York said: "Governor Cuomo's appointment of the Attorney General as Special Prosecutor in these troubling cases hopefully signals a new era of accountability that is critical in ensuring an objective process immune from political agendas."

Attorney General Eric Schneiderman said: "In December, I stood with reform advocates and other public officials to call attention to the crisis in confidence related to the investigation of deaths of unarmed civilians at the hands of police. Today, Governor Cuomo has issued an executive order to empower my office to investigate and, where appropriate, prosecute such cases. I can imagine no more important responsibility, and my office will handle these cases with the highest level of care, professionalism, and independence."

Former Governor David Paterson said: "For the families and friends that have lost a loved one to an altercation with police officers, this is welcome news. Appointing a special prosecutor will ensure that justice is served fairly and that these cases are given the required attention and care moving forward. I applaud Governor Cuomo for once again stepping up to a controversial issue and tackling it head-on."

Assembly Speaker Carl E. Heastie said: "I hope this Executive Order will provide some measure of comfort for families, because these are cases that deserve an independent review to ensure that justice is served. Along with Governor Cuomo, we will continue the fight for a new law which would allow for the appointment of a special prosecutor to investigate cases when deadly force by a police officer is used. This will help to restore the public’s confidence in our justice system and ensure that these proceedings are fair and impartial."

Congressman Hakeem Jeffries said: "In a democracy, everyone is entitled to equal protection under the law. However, when a police officer crosses the line and appears to use excessive force the criminal justice system often fails to hold that officer accountable. That must change. When a police officer takes the life of an unarmed civilian there should be a fair and objective investigation. The most effective way to bring this about is through the appointment of an independent prosecutor. Governor Cuomo should be commended for his vision and resolute leadership in this regard."

Assemblyman Keith L.T. Wright said: "In the wake of widespread community outcry and countless instances of injustice, appointing the Attorney General as special prosecutor in cases of police misconduct is the right step for New York. For decades I have been championing this effort in the legislature, and I am confident this will help restore trust between our communities and the police while ensuring justice to victims of these heinous crimes. New Yorkers stand to benefit greatly from Governor Cuomo's executive action and I look forward to continuing our collective efforts to develop a permanent resolution that includes grand jury reform."

Senator Adriano Espaillat said: "In recent months, communities across the nation have been torn by police-involved incidents of civilian deaths that have eroded the trust in our criminal justice system. I applaud Governor Cuomo’s appointment of the attorney general as a special prosecutor in cases of police-involved civilian deaths, and look forward to continuing to work with him to find a permanent solution. In the interim I trust that Attorney General Eric Schneiderman will be a fair special prosecutor."

Senator Gustavo Rivera said: "This executive order is a positive step in light of the failure of the Republican led Senate in passing meaningful criminal justice reform. It will go a long way in restoring the public's trust in our justice system while we work to pass a permanent solution in the legislature. We have a broken system that does not treat all New Yorkers equally under the law and I commend Governor Cuomo for taking this important step in reforming it."

Senator Ruth Hassell-Thompson said: "From Ramarley Graham to Michael Brown, our nation has seen too many deaths at the hands of law enforcement. Thanks to Governor Cuomo’s leadership, New York is making the statement that these tragic cases will be handled with independence and fairness. Just one death is too many, and by appointing a special prosecutor, this state is taking a courageous step in the right direction."

Assemblyman Michael Blake said: "Today, the moral arc of the universe definitely bent towards justice as I congratulate Governor Cuomo on signing the executive order appointing Attorney General Schneiderman as a special prosecutor. As a Co-Chair of the Criminal Justice committee of the Black, Puerto Rican, Hispanic & Asian Legislative Caucus, we pushed for this victory as part of our 'Before, During & After' criminal justice package to stand up for the families. When we have to use the phrase 'BlackLivesMatter,' it's a reminder that too many of us feel that too many others don't believe that our lives and our justice does matter. The families of these victims will never get back their loved ones. But, we give them dignity by taking a clear step to ensure that further families have a chance for justice. Most officers are doing great and noble work. Today's decision just ensures that when injustice happens, there's the opportunity for voices and lives to matter."

Assemblyman Nick Perry said: "For the families and advocates who have worked so hard to fight for a better justice system, the executive order released today is extremely significant. I am proud to stand alongside Governor Cuomo in his appointment of a special prosecutor, effectively helping those that otherwise do not have a voice. Today, we take a big step forward in the fight to reform our justice system, and I thank the Governor for taking swift action on this critically important issue."

Senator Kevin Parker said: "Recent cases of citizen deaths at the hands of law enforcement have left a discouraging sentiment for people across our nation. Today, under the leadership of Governor Cuomo, we are taking a major step forward in bringing more transparency to these cases that have eroded the public’s trust in our criminal justice system. Because of the Governor’s commitment to bridging the divide between our communities and law enforcement, we are moving forward as a city and as a state."

Senator Bill Perkins said: "When an unarmed person dies as the result of an interaction with law enforcement personnel, we must be absolutely sure that the resulting investigation is independent, thorough, and in the fully pursuit of justice. Today, Governor Cuomo is standing up to make sure that happens. I commend the Governor for his executive order to appoint the Attorney General to oversee these cases – it is the right thing to do."

New York City Public Advocate Letitia James said: "Governor Cuomo's decision to appoint a special prosecutor in crimes against civilians by police officers is a critical move towards criminal justice reform. District Attorneys inherently rely on cooperation from police every day, and we need mechanisms in place to avoid conflict of interests and maintain objectivity in cases of police violence. I first called for a special prosecutor in these types of cases immediately following the non-indictment of Officer Pantaleo in the case of Eric Garner, and I am glad to see progress."