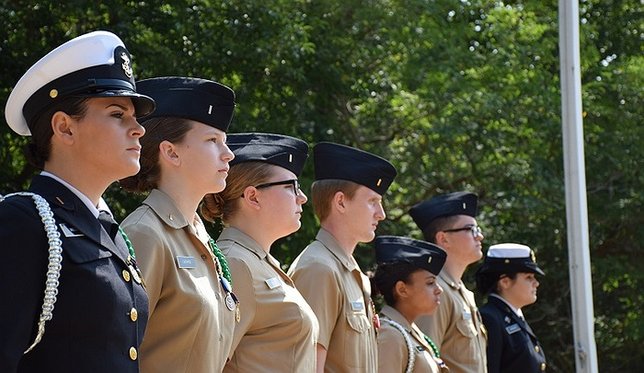 In the outdoor ceremony, the seven seniors were told that with “competence comes the confidence to lead,” by one of their instructors, Senior Chief Dwight Becherer. He also led the cadets in a recitation of the “Cadet Creed” as they gathered around the flagpole at the Old Mastic House. Navy core values of “Honor, Courage and Commitment” were also discussed as a measuring stick for the cadets in meeting the high standards, both academic and physical, of being a cadet officer. 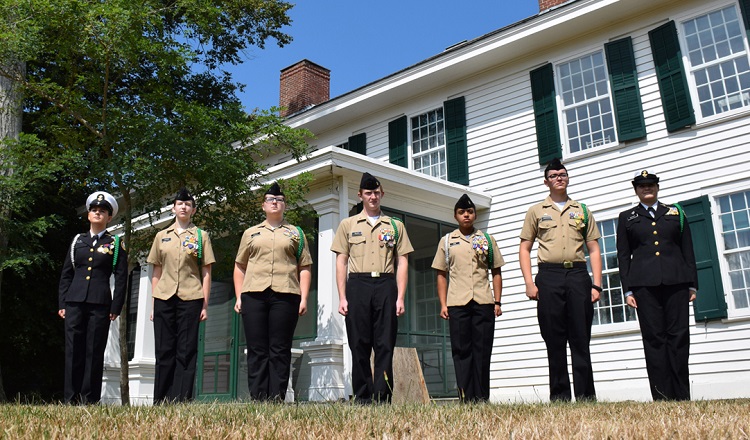 The new cadet officers, Christopher Ballas, Taylor Esposito, Kaylyn King, Jillian LaChacz, Logan Marcotte, Rebecca Shanley and Carlie Wegley, have been honing their skills with two to three years of naval science studies, academic excellence and extracurricular activities, so they are prepared as school starts. “Now they can hold themselves to a higher standard because of their leadership and team-building skills, and in their pride for the program,” said Senior Chief Becherer.

In 1718, Richard Floyd II, grandfather of William Floyd, purchased 4400 acres on Moriches Bay and it was eventually passed down through generations of their family. The Old Mastic House is what the family called their home. Eventually, the Floyd family donated the house, all of its contents and 613 acres of property to the National Park Service in 1976, the Bicentennial of the United States. The National Park Service turned 100 last week when the cadets were there and kicks off a second century of stewardship of America's national parks and engaging communities through recreation, conservation, and historic preservation programs.

America’s NJROTC, or Citizenship Development Program, is currently under the direction of Rear Admiral Stephen Evans, Commander of the Naval Service Training Command, headquartered on Naval Station Great Lakes, Illinois. NJROTC is a program that instills in high school students in U.S. secondary educational intuitions the value of citizenship and service to the United States.

In addition to regular classroom instruction, NJROTC cadets participate in a number of extra-curricular activities throughout the school year and during summer months that are designed to stimulate learning by hands-on experiences and to reinforce the program’s curriculum. Cadet extra-curricular activities include community service projects, drill competitions, academic competitions, visits to naval installations and Science, Technology, Engineering and Math (STEM) training.