The historic Sag Harbor Cinema is partnering with producer Jason Dudek to host the first stand up comedy show in the storied venue on Main Street in Sag Harbor on December 31, 2014! 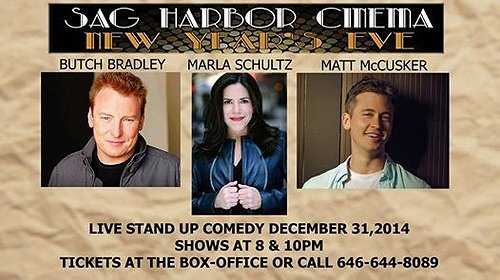 Sag Harbor, NY - December 23rd, 2014 - The historic Sag Harbor Cinema is partnering with producer Jason Dudek to host the first stand up comedy show in the storied venue on Main Street in Sag Harbor, NY on December 31, 2014. Theater owner, Gerald Mallow, decided it was time to introduce live comedy performances to the 480-seat art-house cinema which has hosted live chamber music concerts, jazz concerts, one-man monologues, and burlesque shows up until now. He along with Jason Dudek of HPR Entertainment “could not be more excited to bring quality stand-up comedy acts from around the world to the historic vaudevillian stage”.

The first headliner will be Butch Bradley who is currently on tour in Las Vegas.  Butch has been featured on HBO, Comedy Central, and Montreal’s Just for Laughs Comedy Festival.  He is a favorite of the U.S.O. Comedy tour, entertaining the troops overseas for years.  His larger than life act doesn’t warm a crowd up; it sets them on fire.

The featured act will be Long Islander and Sag Harbor lover Headliner, Marla Schultz, who has also traveled the globe entertaining the troops and as well as civilians. Schultz has been featured on Byron Allen’s Comics Unleashed twice as well as appearances on Comedy Central, Girls Behaving Badly, DIRT with Courtney Cox, Men of a Certain Age, E! Entertainment, WPIX, MSNBC.

The host of the show will be newcomer Matt McCusker.  Matt recently beat out over two hundred and thirty comics to win “Philly’s Phunniest 2014”.

The New Year’s Eve show will be followed by the announcement of the second show in April.  The duo plans to host shows at the venue culminating in a weeklong comedy and film festival in the summer of 2015. (1st Annual Hamptons International Comedy Festival)

About HPR Entertainment
Jason Dudek is the founder of HPR Entertainment.  He has worked on over thirty motion pictures and founded the “Live from the Laugh Factory” comedy shows, a member of both the Director’s Guild of America and the Writer’s Guild of America.  Recently completed the Sci-Fi Feature, TOXIN, starring Danny Glover set for a 2015 theatrical release.  He is repped by Dan Norton of ICM Partners. Please email jasonrdudek@gmail.com for more information.