Governor Andrew M. Cuomo today announced a $10,000 donation from the PGA TOUR to support the "SUNY's Got Your Back" program. 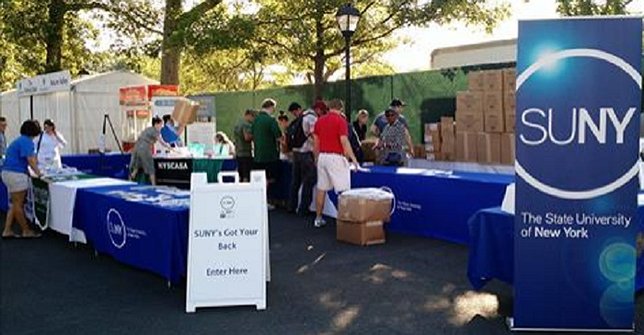 PGA Tour provides $10,000 donation to help "SUNY's Got Your Back" program; PGA Golfers & Wives, SUNY, State agencies and advocates team up to assemble 5,000 comfort bags of personal care items for victims that seek haven at shelters.

Farmingdale, NY - August 24, 2016 - Governor Andrew M. Cuomo today announced a $10,000 donation from the PGA TOUR to support the "SUNY's Got Your Back" program, a collaborative effort between the State University of New York and the New York State Police that funds comfort bags with personal care products for victims of sexual and interpersonal violence. At Bethpage State Park one day before the First Round of The Barclays golf tournament, the PGA TOUR and the PGA TOUR Wives Association joined with scores of volunteers from SUNY, state agencies, advocacy groups and students to help assemble 5,000 comfort bags for victims that flee to shelters to escape an abusive relationship.

"Violence against anyone is inexcusable and we will continue to stand up and speak out against the scourge of sexual and domestic violence wherever it exists," said Governor Cuomo. "The Barclays is one of the top golf tournaments in the country, and today is proof that we can all come together and provide some level of comfort to those seeking a new beginning to their lives."

The "SUNY's Got Your Back" program, which launched in April, has already provided more than 4,000 comfort bags containing items such as toiletries, resource pages, and personal notes to victims and survivors of violence across the Empire State. Altogether, SUNY has assembled nearly 9,000 comfort bags since the start of the program. Volunteers, including members of the PGA TOUR and its Wives Association, today assembled comfort bags at a tent near the entrance to the course before the tournament’s Pro-Am Competition, which is expected to draw more than 10,000 fans. The event is also aimed at raising awareness of domestic violence and sexual assault prevention efforts across the state.

"The SUNY's Got Your Back program is a grassroots effort led by the SUNY Title IX Coordinators Association, in partnership with the state coalitions against domestic violence and sexual assault, and the New York State Police," said SUNY Board of Trustees Chairman H. Carl McCall. "It stems from the focus of our Governor to prevent sexual and interpersonal violence – both on and off campus – as well as the personal commitment of so many volunteers. Now with the support of the PGA TOUR, the Barclays, and the PGA TOUR Wives Association, the SUNY's Got Your Back program has far exceeded our expectations in the amount of resources we will be able to provide shelters throughout New York."

"Being able to give back to the New York/New Jersey Metropolitan area is one of the most important aspects of hosting The Barclays," said Peter Mele, Executive Director of The Barclays. "We are proud to partner with SUNY and to be a part of the 'SUNY's Got Your Back' program."

As a result of Governor Cuomo's landmark "Enough is Enough" legislation signed into law, the State Police launched a Campus Sexual Assault Victims Unit to spread awareness and educate the public. The unit has 11 dedicated senior investigators with the goal to reduce campus sexual assaults through prevention education, by serving as a training resource for college staff, and by providing investigative support to local law enforcement in cases involving sexual violence allegations.

The State Police purchased many of the comfort bags at the event and came out to volunteer. This effort builds on its public awareness campaign that was launched this month to raise awareness about campus sexual assault as students head back to colleges and universities this fall semester. In addition, the Victims Unit is currently scheduled to attend 80 student orientation sessions at 53 college campuses across the State by the end of this month.

New York State Police Superintendent George P. Beach II said, "Education is one of the major factors in preventing sexual assaults on campus. Through events like this one, our investigators are bringing awareness to the issue, teaching prevention strategies, and stressing how critical it is for victims and bystanders to report sexual violence when it occurs."

In addition to the PGA TOUR, PGA TOUR Wives Association, and The Barclays, the "SUNY's Got Your Back Program" has been supported by the New York State Police, JM Murray of Cortland, the Specialty Advertising Association of Greater New York (SAAGNY), the New York State Office for the Prevention of Domestic Violence, Staples, CVS Health, Field Notes, and Notes Inc., a division of Dupli Envelopes and Graphics. For more information about SUNY's Got Your Back, visit here.

New York State Coalition Against Sexual Assault Executive Director Joanne Zannoni said, "We are so grateful for the financial support and the tremendous personal commitment across so many different organizations. The generous donations will help thousands of victims of sexual and interpersonal violence, and the event will raise awareness of the epidemic of sexual assault and domestic violence impacting women, children, and men in New York State."

New York State Coalition Against Domestic Violence Executive Director Connie Neal said, "We are thrilled that the PGA TOUR has shown such an outpouring of support for the 'SUNY's Got Your Back' campaign, and the many thousands of survivors of intimate partner violence in New York State that will be supported by this collaboration. Dating violence and stalking are two of the most prevalent dangers to students on college campuses. We applaud SUNY for not only raising awareness and taking a stand against these issues, but for also providing practical support for survivors in communities across our state."

SUNY Project Coordinator Joseph Storch said, "The 'SUNY's Got Your Back' program has far exceeded our goals. At the outset, we planned for 2,016 bags in 2016, and to date campuses have completed or pledged more than 4,000 bags. We initially approached the PGA TOUR about a small donation. They in turn offered a large donation and the opportunity to assemble 5,000 bags in one day that will immediately be distributed to local agencies. It is hard to fully express our gratitude to the PGA TOUR, the PGA TOUR Wives Association, and the Barclays for their dedication and generosity."

New York State Office for Prevention of Domestic Violence Executive Director Gwen Wright said, "Providing support to a domestic violence or sexual assault victim is a crucial first step in the aftermath of an attack. But ultimately, we need to raise awareness about these issues and how they are negatively impacting thousands of people across the state each year. Our hope is that this collaboration with the PGA TOUR will continue to highlight the critical dialogue on domestic violence and sexual assault prevention we are now having under the leadership of Governor Cuomo."

New York State Office of Victim Services Director Elizabeth Cronin said, "As the state agency charged with assisting innocent victims of crime, we are very aware of how far even a little bit of help and comfort can go in helping an individual start on the road to recovery –especially those who were abused by an intimate partner or sexually assaulted. We proudly support SUNY in this effort with the hope that these comfort bags will be the first small step in assisting these crime victims in restoring normalcy to their lives."

Studies have also shown sexual assaults on college campuses remain both prevalent and underreported –roughly a quarter of women reported having either survived a sexual assault or an attempted sexual assault, according to a 2015 survey commissioned by the Association of American Universities. In addition, fewer than five percent of college women who reported being raped alerted law enforcement of the crime, according to the Bureau of Justice Statistics. Only 16 percent of female student victims of rape and sexual assault received assistance from a victim services agency.