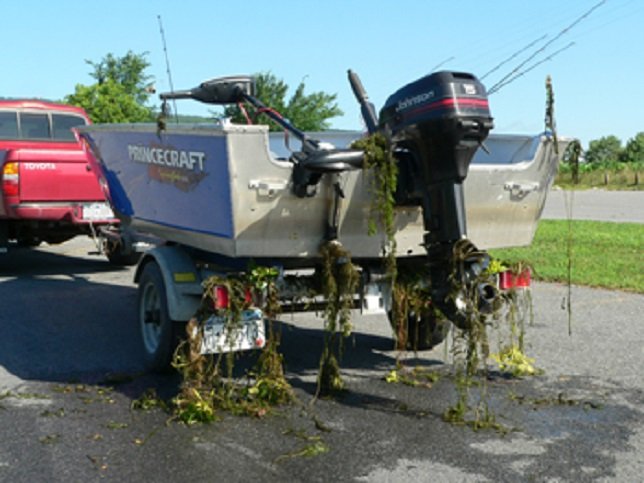 New York is particularly vulnerable to AIS due to the frequency in which ocean-going vessels travel through the Great Lakes.

The New York State Environmental Protection Fund (EPF) is providing the $2 million for eligible projects. Grant amounts will range from a minimum of $25,000 up to a maximum of $100,000. A 25-percent match is required. For a full list of eligible and ineligible forms of match, please view the Request for Application (RFA) webpage at DEC's website.

New York is particularly vulnerable to AIS due to the frequency in which ocean-going vessels travel through the Great Lakes. Once established AIS, such as zebra mussels and spiny waterflea, can spread easily to other inland waterbodies through the State's extensive canal system and through recreational boating and angling. Strategically placed boat stewards help prevent the spread of AIS by educating boaters on how to properly remove and identify AIS and conducting voluntary boat and equipment inspections.

A recent study by the Adirondack Park Invasive Plant Program found that if invasive species are allowed to spread, they could cost the Adirondack economy alone up to $900 million. This includes annual losses in visitor spending, and agriculture and primary forest production value as well as losses in property value that will affect the tax base and borrowing ability for property owners on an ongoing basis.

In his 2015 Opportunity Agenda, Governor Cuomo announced the Protected Landscapes and Thriving Communities initiative to foster the Adirondack's tourism economy, conserve the Forest Preserve and help communities thrive. A core component of this initiative is preventing the spread of invasive species. To support this effort, under Governor Cuomo's leadership, the 2015-16 state budget included an additional $1 million in the Environmental Protection Fund targeted specifically for combatting aquatic invasive species.

The highest scoring projects will have a statewide or regional focus rather than a local focus, involve multiple partners and stakeholders. Grants will be awarded to applicants who clearly demonstrate that they have the knowledge and skill to successfully complete the project. Priority will be given to projects located on or in close proximity to waterbodies where the shoreline is 50 percent or higher in public ownership. Targeted waterbodies must be located wholly within New York State.

The deadline for grant application is January 29, 2016. DEC anticipates announcing grant awards in April 2016. Applicants can apply for the grant through the Consolidated Funding Application website.