The Gold Coast International Film Festival (GCIFF) will be hosting the Long Island Premiere of a new film, ALTHEA, about the trailblazing tennis pioneer Althea Gibson. 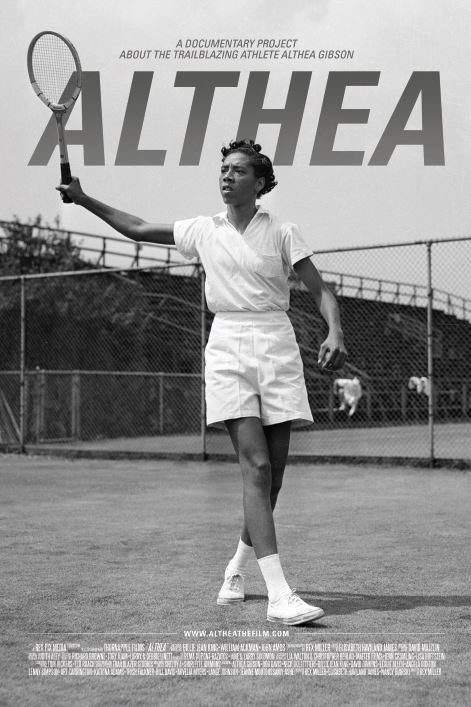 Great Neck, NY - August 20, 2015 - The Gold Coast International Film Festival (GCIFF) will be hosting the Long Island Premiere of a new film, ALTHEA, about the trailblazing tennis pioneer Althea Gibson. The screening will take place on Saturday, August 29th at 7:30pm at Soundview Cinemas in Port Washington. A post-screening discussion will follow featuring acclaimed director, Rex Miller. The premiere is sponsored by the USTA Eastern of Long Island Region.

Althea Gibson was the first African American tennis player to cross the color line. From her roots as a sharecropper’s daughter from South Carolina, to her unlikely ascension within the highly segregated tennis world in the 1950s - in her time, Gibson was recognized as the queen of the sport. She would go on to make history, playing and winning at Wimbledon in 1957 and 1958, and was twice became the U.S. Nationals champion – the precursor of the U.S. Open. The film reveals the triumphs and trials of an amazing athlete whose life and achievements have entered the annals of African American, and tennis history. ALTHEA reveals rare archival material and compelling interviews with those who knew Gibson personally, such as former New York City Mayor David Dinkins, Jeanne Moutoussamy-Ashe, widow of Arthur Ashe, and Billie Jean King (who also serves as one of the executive producers of the film). Gibson’s impact on the sport included her brilliant athleticism, and the way in which she navigated through complex issues surrounding race, class, and gender. She paved the way for legends such as King, as well as the phenomenal Venus and Serena Williams. 50 years after Gibson’s Wimbledon victory, Venus Williams won the Wimbledon trophy, as well as prize money that was equal to her male counterpart – also a first in Wimbledon’s history. Gibson’s legacy continues live on in this new film that celebrates her past achievements and current influence.

The GCIFF produces a year-round film series featuring an exciting slate of quality films and award-winning talent. This fall, the GCIFF will be celebrating its 5th Anniversary Festival November 9-15, and recently won first place in “The Best of the North Shore” competition as the “Best Attraction” within the region.

About the Gold Coast Intl Film Festival
Produced by the Gold Coast Arts Center, the festival has built a reputation for bringing the latest Hollywood hits and Indie favorites to the fabled Gold Coast of Long Island. Add A-list celebrities and unforgettable events to the mix and it’s easy to see why GCIFF has become the “go to” Festival for film buffs in the area and beyond (it is also the last major film festival on the East Coast before Awards season).

The 2014 Festival included 25 feature length films and 35 shorts from around the world, and showcased over 40 filmmakers and special guests, including 4-time Oscar winner Catherine Martin who accepted our Artist of Distinction Award and screenwriter and director Marc Lawrence (Miss Congeniality) and award-winning actor Hugh Grant, both of whom participated in a Q&A after a pre-release screening of their new film The Rewrite. Among the other notables who attended: Len Berman from NBC Sports, David Paterson (Screenwriter, Bridge to Teribithia), Jim Serpico Lee Ielpi, Kristin Thorne of ABC 7, Tony Award-winning actors Phylicia Rashad and Ruben Santiago Hudson, and NY Times sportswriter Harvey Araton.

The year before, the Festival honored legendary actor, Paul Sorvino (GoodFellas, Bulworth, The Cooler) with a Lifetime Achievement Award during their Annual Benefit Gala. The Gala also honored Susie Essman, (co-star of HBO’s Curb Your Enthusiasm) with the Artist of Distinction Award for Comedy. Melanie Lynsky (2 ½ Men, Ever After), Emmy Nominated Actor, Jason Ritter (Parenthood), Sean Young and Robert Clohessy were among others who attended the festivities.

About the Gold Coast Arts Center
The Gold Coast Arts Center is a 501(c)(3) organization dedicated to promoting and supporting the arts through education, exhibition, performance and outreach. For over 20 years we have brought the arts and arts in education experiences to tens of thousands of people throughout our region through our 1) School for the Arts, which offers year-round classes in all visual and performing arts to students of all ages and abilities, (2) Free public art gallery, (3) Concert and lecture series, (4) Outreach programs, which each year bring artist residencies, after-school programs, school assemblies, teacher training workshops and parent-child workshops to students, senior citizens, teachers and others in underserved communities throughout our region, (5) Year round film screening and discussion series and (6) Gold Coast International Film Festival, now in its 4th year. The Arts Center is an affiliate of the John F Kennedy Center for the for the Performing Arts: Partners in Education Program and National Gallery of Art, both located in Washington DC.