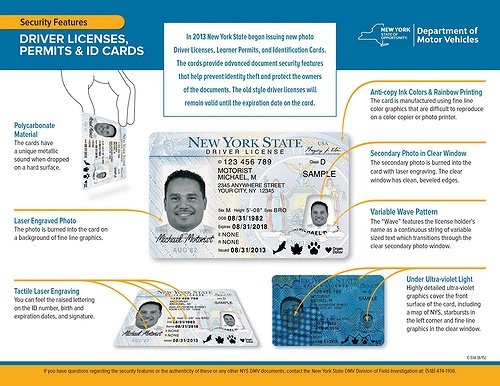 Albany, NY - August 19, 2015 - Governor Cuomo announced a new state effort to educate bar owners, security, and staff of licensed establishments about new security features included on driver licenses, permits, and ID cards issued by the state. A new electronic brochure will be distributed to thousands of bar owners across the state that provides a description of the advanced security features in these forms of identification to make it easier for owners and staff at establishments with liquor licenses to authenticate them and identify fake IDs.

“The new security features embedded in New York’s redesigned driver’s licenses and identification cards are second to none and we’re looking to help responsible bar owners and their employees spot fakes and forgeries,” Governor Cuomo said. “As a new college semester is about to begin, we must work together to keep underage New Yorkers out of the bars and out of harm’s way.”

The Department of Motor Vehicles (DMV) and State Liquor Authority teamed up to create the brochure that outlines security features on the new ID cards (view here), which DMV began distributing in 2013. More than half of the cards currently in circulation are the more secure, redesigned version, but the old style remains valid until the expiration date is reached. The new security features, which are among the most advanced in the nation, are highly resistant to tampering and are designed to prevent identity theft.

Motor vehicle investigators work closely with local police, New York State Police and sheriff’s departments across the state in underage drinking enforcement, targeting facilities that are identified as the “last drink location” for individuals who are under 21 and arrested for DWI, including concert venues and bars across New York. Those under 21 are given a vertical ID card, making it easier for bar owners and those who check IDs to identify who is underage.

DMV Executive Deputy Commissioner Terri Egan said, “The new security measures imbedded within the redesigned licenses make them virtually impossible to alter or counterfeit. And, because we know businesses rely on the driver license to validate someone’s age, especially when presented to purchase alcohol, the card’s enhanced security features promote public safety by helping to reduce underage drinking. By working together to distribute information about the new cards, DMV and the State Liquor Authority are providing businesses that serve alcohol with the information necessary to authenticate the new licenses, ID cards and permits.”

State Liquor Authority Chairman Vincent Bradley said, “In addition to assisting regulatory agencies and law enforcement, DMV’s enhanced licenses will make it easy for conscientious bouncers, servers and clerks to quickly spot licenses that have been altered or forged. Educating licensees on these new security features will increase compliance and assist in our continuing efforts to prevent young New Yorkers from buying and abusing alcohol.”

In 2014, the State Liquor Authority successfully prosecuted 2,039 sales to minor violations, a 19-percent increase from 2013 and a 97-percent increase from 1,036 prosecutions in 2010. In addition to increased enforcement, the State Liquor Authority works closely with the licensed community to increase compliance, including certifying and promoting Alcohol Training Awareness Program to educate licensees and servers on preventing sales to minors and intoxicated patrons. The number completed Alcohol Training Awareness Program trainings has more than doubled from 5,407 individuals trained in 2010, to 11,499 in 2014.

Licensees charged with underage alcohol sales face civil penalties of up to $10,000 per violation, with fines starting at $2,500 for a first-time offense. Repeat offenders also face possible suspension or revocation of their licenses. In addition, employees or licensees who sell to minors can be arrested and charged with a misdemeanor.