Governor Andrew M. Cuomo today announced that New York State has extended the ban on residential brush burning until May 21 due to continued dry conditions across the state. 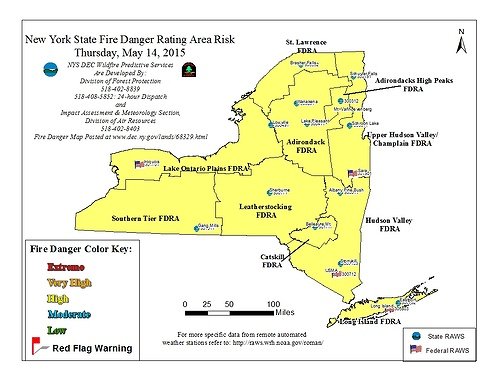 Albany, NY - May 13, 2015 - Governor Andrew M. Cuomo today announced that New York State has extended the ban on residential brush burning until May 21 due to continued dry conditions across the state. Open burning of debris is the largest single cause of spring wildfires in the state. In addition, the high fire danger burn ban prohibits outdoor fires, such as campfires and recreational fires, and open fires used for cooking. View the proclamation here.

“State officials have worked hand-in-hand with local firefighters to help contain a rash of wildfires that have broken out across New York in recent weeks," Governor Cuomo said. "With dry weather conditions persisting, I am extending this burning ban to better protect the health and wellbeing of New Yorkers who may find themselves and their property in harm’s way. I urge everyone to take the necessary precautions to protect themselves, their neighbors and the first responders.”

The eastern, central, southern and far northern regions of the state are rated as having a high risk of fire danger, according to the Department of Environmental Conservation. The Southern Tier, Lake Ontario, and Adirondack regions are rated as having a moderate risk of fire danger. Additionally, the red flag warning is a short-term, temporary warning, indicating the presence of a dangerous combination of temperature, wind, relative humidity, fuel or drought conditions which can contribute to new fires or rapid spread of existing fires. This year, 110 fires have burned nearly 3,600 acres.

While all wildfires in New York are now contained, numerous state agencies deployed resources over the past two weeks to help battle wildfires in the eastern New York.

On May 5, Governor Cuomo activated the Fire Operations Center at the New York State Emergency Operations Center in Albany to monitor and assist with a large brush fire in Ulster and Sullivan counties. Assets from the State Division of Homeland Security and Emergency Services, Department of Environmental Conservation, the State Police, State Department of Transportation and the New York State Division of Military and Naval Affairs coordinated the fire response, including assistance from fire departments in Greene, Schoharie, Delaware and Broome counties. The Roosa Gap Fire in Sullivan and Ulster counties was caused by debris burning and consumed more than 2,700 acres. The fire is now contained. Patrols continue to monitor the site to ensure there are no flare ups.

All trails in the Hunter-West Kill Wilderness area in the town of Hunter, Greene County, are now reopened. The Department of Environmental Conservation closed these trails on May 8 while the Heavenly Valley Road Fire burned over 110 acres.

Since 2009, New York State has enforced a residential brush burning ban for towns with less than 20,000 residents from March 16 through May 14, the period when most wildfires occur. Some towns, primarily in and around the Adirondack Park and Catskill Park, are designated “fire towns,” and open burning is prohibited year-round in these municipalities unless an individual or group has a written permit from the Department of Environmental Conservation. Burning garbage is prohibited year-round. Violators of the open burning regulation are subject to both criminal and civil enforcement actions, with a minimum fine of $500 for a first offense.

Department of Environmental Conservation Commissioner Joe Martens said, “Keeping the burn ban in place for an additional week, and including a ban on cooking and recreational fires, is necessary and prudent. Governor Cuomo’s action will remind people to remain vigilant and aware of their surroundings. Many of us enjoy the beautiful natural resources we have in New York, and we all play a role in protecting these resources as well as our family and friend’s by preventing fires.”

Division of Homeland Security and Emergency Services Commissioner John P. Melville said, “We are urging the public to be mindful that during periods of dry weather and gusty winds, brush fires can ignite from anything that can create a small spark. A lightning strike, a discarded match, or even a car backfiring, could cause a dangerous fire. It is important to take precautions to protect our neighbors and our property from situations that can quickly go from bad to worse.”

Since the ban was enacted, the average number of spring fires per year has decreased from 3,297 to 1,425 or 43.2 percent. To view an updated map of fire danger ratings in New York, click here.