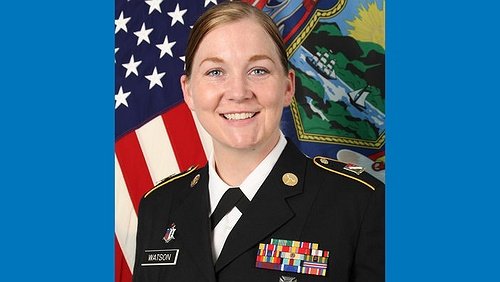 Watson, age 28, is being recognized for an incident which occurred on the night of Nov. 5, 2014, when she rushed from her home in Syracuse out into the street when she heard gunfire. She found two teenage boys shot and bleeding on the ground. Heedless of the risk of further gun fire, Watson began administering emergency medical care to the boys and took charge of the scene, directing bystanders to assist in their treatment and call 911 while waiting for the police to respond.

"Without hesitation, Staff Sgt. Watson placed her own personal safety at risk in order to help those in need," Governor Cuomo said. "I commend her heroic actions and am proud to see this exemplary New Yorker receive this well-deserved honor."

The award will be presented to Watson tomorrow, August 19 at the Farmingdale Armed Forces Reserve Center by Major General Patrick Murphy, the Adjutant General of New York. The New York State Medal for Valor is awarded to members of the New York National Guard who display valor, heroism, courage or gallantry either in a military or civilian capacity.

Adjutant General of New York, Major General Patrick Murphy, said, "Staff Sgt. Watson acted in the best traditions of the New York National Guard when she went to the aid of those two young men, despite the risk that the assailants could open fire again. She took her military training and expertise and used it to help her neighbors and community."

Watson, who currently serves as an Army National Guard recruiter assigned to the Farmingdale recruiting office, was in her house at about 10 p.m. when she heard gunshots outside in the street. After checking on her sleeping son, she looked outside the house to see two boys, ages 13 and 15 laying in a yard across the street. She called for her sister to call 911 and then raced outside and across the street to help.

One boy was shot in his upper buttock. She had nothing to stop the bleeding so Watson pulled off the boy's boot and sock and used the sock as a bandage. She turned him over to check for an exit wound, and seeing none, she asked an onlooker to hold the bandage on the wound while she checked the other victim.

The other victim was shot in the thigh and in the calf. She told him he had to lie still and let her check his wounds because there is a major artery in the leg. That boy said he was getting cold so Watson sent her sister inside to get a blanket. By the time her sister returned, the police and emergency medical teams arrived and Watson turned the care of the two teens over to them.

Police later determined that passengers in a vehicle had shot at the two teenagers from behind.

At the time of the event Watson, a Binghamton native, was assigned to the 107th Military Police Company, which is headquartered in Brooklyn. She is now assigned to Company A of the New York Army National Guard’s Recruiting and Retention Battalion as a full-time recruiter.

A member of the New York Army National Guard since 2004, Watson served as a medic in Afghanistan in 2012 and 2013 with 3rd Battalion of the 401st Army Field Support Brigade at Bagram Air Base.

Watson will receive the Medal of Valor at 10 a.m. on Wednesday, August 19.