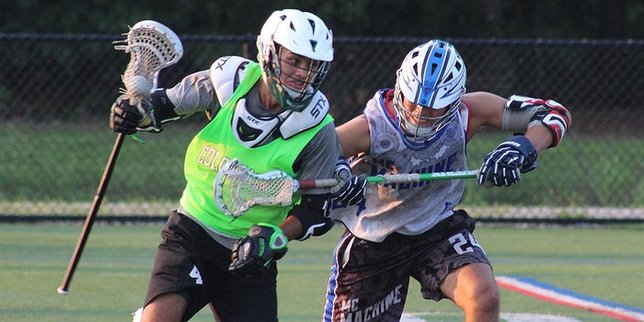 Mastic Beach, NY - August 16, 2018 - The William Floyd Colonials boys’ varsity lacrosse team recently concluded an excellent Town of Brookhaven Lacrosse Summer League season with a 10-0 regular season record (first place in their division), a thrilling come-from-behind playoff victory and an appearance in the championship game.
Although the summer lacrosse season is not as high stakes as the in-school spring season, it is a great opportunity for the student athletes to continue their growth and development within the William Floyd system, according to varsity head coach Desmond Megna.
“The benefits (of summer league) are that the kids continue to play with their high school teammates and build continuity within our system,” said Coach Megna. “This summer I took a different approach that I believe will pay dividends in the spring.”
That different approach in coaching style included the addition of two former William Floyd players, Eric Brust and Victor Olivero, to the coaching staff. “Both Eric and Victor know the system as well as our on- and off-field expectations of the boys. Sometimes it’s good to hear another voice,” said coach Megna.
One of summer league’s most valuable components is that it allows the coach to evaluate players that have not previously had large roles with the team. It also allows the coach to see areas of potential strengths and weaknesses going forward.
“Offensively I think we saw a more team-oriented offense with an emphasis on sharing the ball. Players like Bryan Lubitz, Ronale Thomas and Noah Taylor are becoming major threats. While other players who maybe didn’t have a large role last year like Timmy Mullally stepped up and made significant contributions.”
Coach Megna added that Matt Olivero has been a nice surprise taking over for the best goalie in the county last year, Andrew Brust, who graduated in June after a record-breaking 221-save season filled with accolades including Academic All-American. “Olivero had a great summer and earned himself several college looks,” added Coach Megna.
Another standout player for Coach Megna was Jezayd Hall who he describes as “the most consistent player and probably the MVP of the summer who has cemented himself as one of the top face-off guys in the county.”
A tremendous summer campaign only raises the expectations for next spring. Coach Megna expects his team to be among the best on Long Island, battling in the playoffs where anything can happen. “This summer the boys have created a buzz and there is a little bit of hype around them. We have to have a solid fall and winter to show that the hype is justified and deserved!”
After a stellar regular season and a top playoff seed, the Colonials participated in a tournament-style playoff, battling Middle Country in their first game. After falling behind in the first half, the Colonials stormed back, tallying two goals in the final three minutes to send the game to overtime. William Floyd scored the game-clinching goal only a few minutes into the overtime period, defeating Middle Country and advancing to the championship game against Comsewogue, a top-seeded team in their division with an equal 10-0 record. Unfortunately, the Colonials fell short in the championship game, finishing up their season second-place overall in the Town of Brookhaven Lacrosse Summer League.
Congratulations to Coach Megna, the entire coaching staff and the student athletes that put together a fantastic summer season!