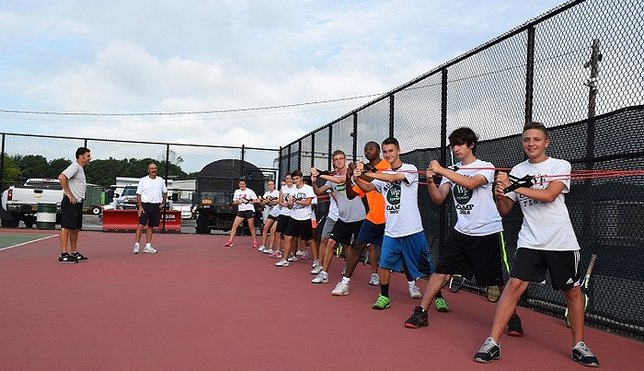 Tennis is one of many camps held at William Floyd throughout the summer.

Mastic Beach, NY - August 16, 2016 - For the 12th consecutive year, William Floyd varsity head coach Dave Pia is overseeing an eight-week summer tennis camp for girls and boys ranging in ages as young as third grade all the way up to the college level for players who are looking to improve their game. The camp, open to residents and non-residents, has more than 110 players mostly from the William Floyd School District, along with students from Center Moriches, Eastport-South Manor, Longwood and Bishop McGann-Mercy.

Under the guidance of Coach Pia, a two-time United States Tennis Association Long Island Region (Eastern Section) Coach of the Year and Newsday Coach of the Year for 2014, players have been working on developing and improving their tennis fundamentals, which include serving, groundstrokes, volleys and doubles play. They also work on tennis conditioning exercises, as well as strength training.

“The tennis camp has been instrumental in developing a successful boys and girls tennis program at William Floyd,” said Coach Pia, who led the varsity girls tennis team to a Suffolk County Championship in 2014. Additionally, under Coach Pia’s tutelage, the girls have qualified for the postseason in 13 consecutive seasons, which includes four consecutive Big 4 Championships and two undefeated regular seasons in the past three years; the boys have had success as well, with playoff appearances in six of the past seven seasons.

With the girls varsity tennis season just a few short weeks away, Coach Pia has the team poised to defend its division title for the fifth consecutive year, as well as qualify for the playoffs for the 14th straight year. “The boys and girls have worked hard all summer on improving their tennis fundamentals. I'm hoping it will lead to another successful year with postseason play,” added Coach Pia.