Kaminsky: "It must not be forgotten that our subway crisis impacts many hardworking Long Islanders." 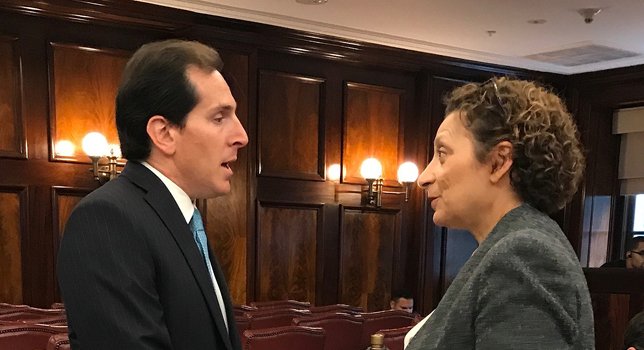 Long Island, NY - August 8, 2017 - Today, Senator Todd Kaminsky attended the New York City Council Transportation Committee’s oversight hearing regarding the Metropolitan Transportation Authority (MTA) Subway system. After the hearing, Kaminsky released the following statement regarding the ongoing, extensive issues plaguing the NYC subway system and how those delays impact Long Islanders already suffering on the Long Island Rail Road (“LIRR”).
“It must not be forgotten that our subway crisis impacts many hardworking Long Islanders. I attended today’s hearing because my constituents get off the LIRR and onto the NYC subway where they are again forced into packed cars with endless delays and they deserve better and demand accountability,” said Senator Todd Kaminsky. “Long Islanders pay among the highest cost of commuting in the country and they deserve nothing less than a dependable and sane commute.”
Senator Todd Kaminsky has led the fight for improving service and reducing fares on the Long Island Rail Road. In May, he hosted a rally, attended by scores of people, to “Sack Amtrak.” He twice penned letters to legislative leadership requesting they hold emergency hearings on conditions at Penn Station, and toured the facility, insisting that Amtrak officials do all they can to remedy the situation. In response, the Assembly held hearings during which Amtrak and MTA officials testified, disclosing new, actionable information. Senator Kaminsky has spoken out against the increase in LIRR fares while performance has declined, and challenged the MTA Director in Senate hearings on the poor state of several stations in his district. Most recently, Kaminsky authored a letter to MTA Chairman Joseph Lhota calling on his agency to explore establishing a ferry route to Manhattan from the South Shore of Nassau County, and requesting that Lhota join the Senator and local elected officials for a tour of potential docking sites.