Governor Andrew M. Cuomo today urged New Yorkers to prepare for potentially hazardous weather due to Tropical Storm Hermine that is moving up the East Coast. 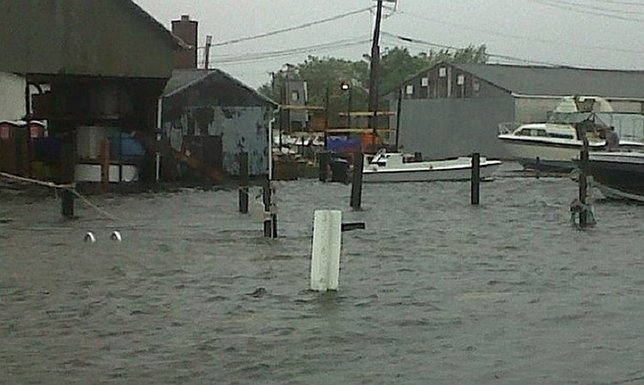 Photo by: John Galletta, via LongIsland.com.

Albany, NY - September 3, 2016 - Governor Andrew M. Cuomo today urged New Yorkers to prepare for potentially hazardous weather due to Tropical Storm Hermine that is moving up the East Coast, and will impact Southern Westchester, New York City and Long Island – areas which are now both under a Tropical Storm Warning – beginning Sunday through Tuesday. The storm is expected to last longer than initially anticipated across the downstate region. The Governor is activating the State Emergency Operations Center beginning Sunday at noon, and State Emergency Personnel are actively monitoring the storm as it approaches. Stockpile resources in the downstate region – including sandbags, high-axle vehicles, pumps and generators – are prepared for deployment, and the National Guard is on alert throughout the region.

"As Hermine approaches, we are taking every action necessary to protect New Yorkers and our most vulnerable infrastructure across downstate,” Governor Cuomo said. "We are monitoring the storm's progression around the clock and, while the latest forecasts spare our state from the brunt of the storm, I have directed emergency response officials to pre-deploy high axle vehicles and swift water rescue teams in the event of localized flooding. I urge residents and visitors to check local weather reports before traveling tomorrow and Monday and to stay informed by using NY Alert‎."

Tropical Storm Hermine is moving east/northeast and is expected to slow down Sunday and into Monday and stall over Long Island through Wednesday. All coastal areas in New York are in a Storm Surge Watch and it is expected to escalate into a Storm Surge Warning as the storm nears New York State. The storm will bring heavy rains, dangerous rip currents, high waves, beach erosion and coastal flooding, especially in the back bays of Long Island. Wind gusts of 60 mph are predicted for the Long Island area beginning Sunday morning. While the center of the storm is expected to remain south and eventually east of Long Island, impacts will occur well away from its center.

Governor Directs Additional Pre-Deployment of Essential Assets to Region
The Metropolitan Transportation Authority has deployed additional personnel to assist with storm preparations throughout the region. Most weekend work has been canceled and their Incident Command Center will be activated as of 8 p.m. this evening. Crews are out inspecting pumps and drains throughout the system and pump trains are also being staged and readied for deployment. Trains are also being moved out of the Coney Island and 207 St Yards to secure areas of the system ahead of rainfall. Additionally, the NYC Subway system, the Long Island Railroad, New York City Buses and Bridges and Tunnels are preparing for any storm surge and are closely monitoring wind conditions that could impact any part of the system.

The Port Authority of NY and NJ has positioned and is prepared to deploy nearly four miles of flood barriers to protect critical transportation facilities, in addition to more than 170 generators and pumps to ensure continuity of service. The Port Authority will have a full complement of staff at all of its transportation facilities to ensure that the hundreds of thousands of customers are safely accommodated, and will continuously coordinate with its federal, state and local partners throughout the storm.

The Public Service Commission is in constant communications with all utility companies and starting communication with partner utility companies in the case that requirements exceed capability. PSEG has also secured 500 additional foreign linemen and 250 additional tree personnel. Utilities in the region are ready to respond in the event of wide spread power outages.

The New York State Office of Parks, Recreation & Historic Preservation has closed Long Island ocean beaches beginning tomorrow to swimming until further notice, and will continue to monitor surf conditions. Nassau County has also requested the use of one sandbagger and one pallet of sandbags to prevent flooding. While all state parks will remain open, water areas will be closed to the public.

The Department of Transportation has more than 1000 operators and supervisors positioned in the Hudson Valley and on Long Island ready to respond with 379 large dump trucks, 86 loaders, 29 chippers, 9 bucket trucks, 9 excavators, 2 graders, 6 vacuum trucks with sewer jets, 14 water pumps, and 14 traffic signal trucks.

The Department of Homeland Security and Emergency Services has prepositioned three High Axle Vehicles to the Brentwood stockpile location. Each has been equipped with personal flotation devices, hand lights, hand tools (forcible entry and shovels), blankets and an inflatable boat. Additionally, two, three-person DHSES OFPC Swift Water Rescue Teams are pre-deployed to the Brentwood stockpile along with four logistics and planning staff and the STR communications team, ready to respond if necessary.

The State Police has swift water teams prepped and on standby and is fully staffed in the region.

Additionally, personnel from State Office of Emergency Management, State Police, Department of Transportation, Military and Naval Affairs, and MTA are staffing the Nassau and Suffolk County Emergency Operations Centers in advance of the storm.

Stockpile Resources Prepared for Deployment
In addition to the assets pre-deployed ahead of the storm, New York State stockpiles in Brentwood and John F. Kennedy International Airport contain additional resources available for use:

Through NY Responds, the State’s incident management system, Nassau County Emergency Management has requested the use of one of the two sand baggers and one pallet of sandbags for use in some of their typical coast line inundation areas.

Additional resources from stockpiles and agencies across the state are available for transport to the affected region if necessary.